We used to go to the zoo quite often when Cannon was little.  He loved it!  He loved all the animals, running around free, and feeding the giraffes.  But when everything else changed, so did our zoo trips.  It became impossible to take him as it was the site of many a colossal meltdown.  So, we stopped going completely.  His preschool class went last year for a field trip but we skipped out that day.  This year, with a year’s worth of growth under our belt, it was time to try again.  So, we did.

We arrived about 15 minutes ahead of the school bus carrying the rest of his class so we stayed in the car as long as possible before going to the ticket area to wait.  Waiting is not a pleasant experience when Autism is involved.  Autistic kids do not have a patient bone in their bodies.  But, the patience wore out in the car as well, so after a few minutes, we started for the entrance.  Cannon, Townsend, and I ended up waiting about 10 minutes before the bus arrived.  We found a bench and hung out.  One of our therapists joined us to help me with both boys.  Cannon struggled immediately as the train was nearby and it was all he wanted in the world at that moment.  He screamed non-stop and fought like crazy to get to it.  Finally, the bus arrived and his teacher checked us in and allowed us to be on the first train ride.  (She is AWESOME and so sympathetic towards Cannon!)  Cannon snuggled into my lap on the tiny train.  Until we got moving he screamed so loud and hard, a little boy sitting in our car asked to move.  Story of our life.  Once we got going, he relaxed a bit and enjoyed the ride.  We rode around a lake and saw ducks, grass, a couple man -made waterfalls (it’s the desert so that is a treat), and lots of people playing in the park nearby.  He was upset when we the ride ended but the snack I pulled out of my bag was an immediate fix to that.  Cannon is HIGHLY motivated by food!  We finished quickly.  Yet, another of his issues.  He stuffs himself, even if he starts choking, when you don’t control every bite.  It is a sensory thing.  The zoo allowed us to enter before everyone else and we were off.  We saw a bear, tiger, peacock, elephants, and giraffes within minutes.  Cannon did not like having to hold someone’s hand but it is necessary with him.  He is chronic when it comes to taking off.  He just wants to run aimlessly anywhere and everywhere without looking where he is going or paying attention to anyone around him.  He will run into a fence or run someone over……that is just Cannon.  We wanted to feed the giraffes but the line was long so we waited until the line died down some.  We still had to wait a bit, though, which provided for more screaming.  He WAS impressed enough by them that when it was our turn and I told him the giraffes would run away if he screamed……he did stop.  He, then, fed 3 carrots to a giraffe like a champ.   Made his Momma proud!  We washed our hands then were off to see more of the zoo. 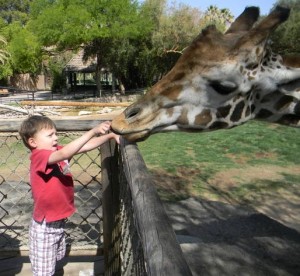 Things quickly got worse in the behavior department.  There were several other school groups there that day and a lot of traffic on the walking paths.  If you read “The Ten Things Every Autistic Child Wishes You Knew” on my “Links” page you will get a small clue as to what it is like to have sensory issues and go out into a public place.  I imagine for him, just because I know him the best, it is that the congestion of people is scary, overwhelming, visually over-stimulating, and also just bothersome to him.  He wants to run and can’t get through the crowd quickly enough.  Also, all the sounds……animal noises, ringing cell phones, babies crying, kids yelling, gates opening, stroller wheels squeaking, etc…….all can cause a child to be set off.  Smells, too!  And we all know that there are plenty of smells at the zoo that can bother you.  Now imagine if your sense of smell was heightened due to sensory issues.   All of your senses are telling you that the world is attacking you and that your only means of coping is to scream and lose control of your body.  So, he did that all through the rest of the zoo.  The best thing I can (and did) do for him was scoop him up on occasion, have a seat, snuggle him, massage his tensed up muscles, and remind him that Mommy is here and I am going to keep him safe.  We struggled through the rest of the zoo.  We saw a polar bear, otters, lions, tortoises, and monkeys.  Most of the animals, he probably didn’t even notice their existence because he was so upset.  The things he showed interest in were a large, plastic tortoise shell that you could crawl through (a very sensory activity), a large spinning water wheel, and turning the crank of a souvenier penny mashing machine.  The most fun he had all day was when 2 ducks walked across the path and he started chasing them.  He was laughing so hard.  But, of course, they were not amused and ran for cover out of sight.

Which brought about the final and most colossal meltdown of the day.  We didn’t even go through the final 1/3 of the zoo.  It was just too much for him.  So, I carried him out of the zoo kicking and screaming and we ate lunch on a grassy area in front of the zoo before leaving for home.  We had some fun even though most of the time was tough.  I plan to try it again soon because I do want Cannon to learn to face his fears.  We just have to do it in small doses to keep it humane!

Love to all who read this!