I am so sorry I have made all our faithful followers wait to hear the final results of our trip to Nationwide Children’s Hospital in Ohio. Exhaustion had gotten the better of me. Every time I have sat down to type the last couple of days…..I have fallen asleep. Forgive me.   Here we go….

Friday morning at 9 a.m., we met with the Chief of the Pediatric Motility Center, the Fellow we had been working with, as well as the Pediatric Psychologist that is the Clinical Lead for the G.I. Clinic. They had a computer set up so that we could visibly see the results of the Manometry tests they had completed, diagrams on the wall to help us understand as they explained their way through this, as well as other documentation from our visit.  And most importantly, they gave us plenty of their time (an answer to prayer)!  The Doctor began with some good news. Cannon does NOT have Gastroparesis as was previously thought. The tests done disproved this with 99.something or other degree of certainty. We don’t know what caused the scope back in May to look the way it did.  The one that started all of this.  But it is virtually and definitively not so.  This is wonderful. Gastroparesis is a life long, debilitating condition that we wanted no part of. That was the good news. Then, they placed this diagram in front of us…… 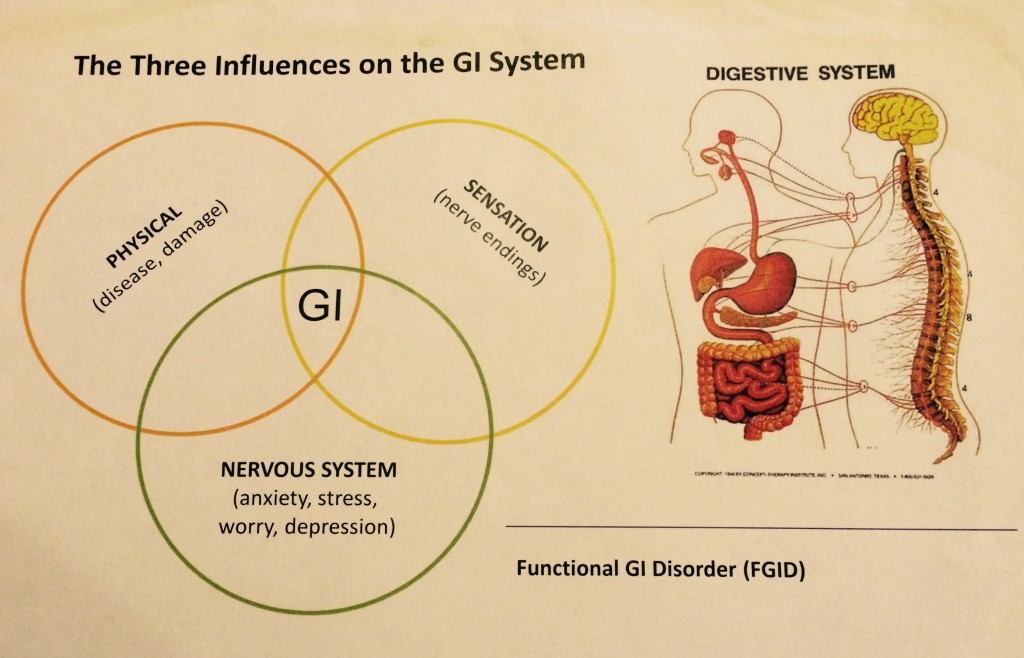 ……..explaining that each of issues within the circles have to work together to have a positively functioning G.I. system. Through the testing that was done…..Cannon’s problem appears to be with his nerve endings and has led to issues with his Nervous System. The Manometry test done on his colon made this plain as day. I wish I could explain the uber specifics of the tests but I will most assuredly butcher it. I will sum it up by saying that they measured the contractions and compared them to that of a normal person. They determined that Cannon’s contractions of his colon are normal…..perfectly normal. But we, ourselves, witnessed his reaction to those normal contractions and it was awful. He was screaming, fighting, and posturing like crazy. It was hard to watch and get him through. So, what this tells us is that his nerve endings are giving his brain faulty information and causing the eruptions that we see every day. His organs are so incredibly sensitive that they cannot cope with even what is normal.  For almost 5 years now, we have known that Cannon has a Sensory Processing Disorder.  And when he was diagnosed with that disorder, I remember the Physical Therapist telling us that this affected all areas of his life.  But I NEVER thought it would go this far.  It truly breaks my heart.  My poor sweet boy.  He just has so many things making it so desperately hard to reside in his little body.  This information gives us so much insight into why he acts the way he does about digestion and so much more.  Sensory issues are quite hard to explain and I am not sure I have done a good job.  Feel free to ask questions if you have them.  I guess the best summation I can think of is this…….Cannon’s body is so very sensitive that even normal bodily functions and sensations cause great pain.  Sigh.  But now we know……and have to figure out ways to help him.

(On a side note, you may remember that Cannon ripped out one of the tubes that was to be used to do the same sort of Manometry test on his stomach.  Therefore, that test could not be done.  The doctor feels confident that Cannon’s gastric emptying study eliminates the possibility of Gastroparesis and that the findings in his colon will translate to his stomach contractions as well.)

And  now, here it is.  Our all new, comprehensive plan for Cannon……..

1)  The doctor believes that the formula we are using for the daily flushes of the Chait Button in his abdomen is flawed. We use a combo of sterile saline and an agitant (liquid glycerin). This irritates his colon enough to get it moving. When he first got the button 3 years ago, we tried to just use saline but it wasn’t strong enough to do the job. We had to add in the glycerin. And keep adding and adding and adding. Now, we use 50 ml’s of glycerin to 80 of saline. The doc feels it needs to be more like 10-20 of glycerin to 200-300 of saline. He feels like too much agitant could be contributing to his intense nausea and that adding so much more saline will soften things and do the same thing as Miralax and another drug he takes for the same purpose.

2) Another idea the doc had was to remove 2 out of the 3 doses of reflux medication that Cannon was taking daily.  We had described to him how horrible his breath can be at times.  I don’t just mean your run of the mill bad breath.  I mean…..it smells like the very strongest of chemicals.  It can have a “light your nose on fire” type of effect.  He believes that by suppressing too much acid was probably allowing more bacteria to grow.  Something like that.

3)  Cannon was already on an antibiotic but has been for 1 1/2 years.  So, we are going to change it up and do something a little different.  He would like us to fill prescriptions for 3 separate antibiotics and use one on one week…..another the next week……and then the 3rd the following week.  And just keep rotating that way.

4)  He feels we should stop 2 drugs altogether …..one was for reflux and the other helped with hydration in his stool.  He doesn’t think he really needs them.  But he would like to add a med for nausea.

5)  We are dropping some of his diet restrictions.  Not jumping to processed foods or anything…..but he has had to eliminate all kinds of fruits, vegetables, and more due to the bacteria issue.  This doc feels that this is no longer necessary.  We will keep things very organic and continue to eliminate dairy, gluten, and artificials.  But loosen up a bit.  We have to keep the mindset however that his body is incredibly sensitive.  If he can’t handle normal bodily contractions and functions without pain and because it is so darn sensitive…….we have to be wary of all ingredients contained in anything he eats.  That part is nothing new and I am fine with it.

6)  Finally, he wants us to speak with our Developmental Pediatrician about anxiety meds that are successful within the ASD  (Autism Spectrum Disorder) community and that are more time released.  Years ago…..prior to putting him on a med for ADHD…..his Psychiatrist tried him on several drugs for anxiety.  All were horrendous failures and made things so much worse.  The Psychologist we met with in Ohio quizzed me about which ones were tried and commented that those were all “fast acting.”  He feels that those types of meds may have shocked his sensitive little system and done more harm than good.  We agreed.  He feels that the implementation of a “slower acting” or more time released med could help Cannon so much with his response to the pain he feels.  Particularly when he has the urge to be sick.  He says that because he is in pain so very often…..that throwing up during this time has become a “learned behavior.”  Not something Cannon wants to do or makes himself do but something his body has just learned. “Oh, ouch…..that hurts!  I throw up now.”

That was all probably WAY too much info and I will apologize for that.  Sorry y’all.  But, we have had so many of you ask for specifics and also have so many friends in the medical field now that I figured being vague wan’t an option.  As you can see…..the doc had a lot of ideas.  And that is EXACTLY why we wanted to go to Ohio.  We felt like over the last 5 years, medicines and restrictions have continued to pile up and not much was ever eliminated or changed.  We absolutely hated that and felt like we were beating our heads against a wall.  We needed “fresh eyes” and a totally new perspective.  And we feel that is exactly what we got.  Now, we have a plan in place that we are happy with.  One that addresses all the issues…..his flushes, reflux, nausea, bacterial overgrowth, diet, and anxiety.  This will not happen quickly.  He will still feel very similar to when we left for Ohio for a while.

If we don’t do this slowly…..we won’t know what is working and what isn’t.  We are starting with adjusting his flushes.  Hoping to find the right balance between what doesn’t overstimulate his colon and cause it extra pain……but not so little that we can’t get it moving at all or cleansed completely.  And we are in the process of dropping the 2 drugs I mentioned.  The Ohio doc’s recommendations are going out to 4 of Cannon’s docs in AZ this week hopefully via a letter.  I will then have to make appointments and/or speak with them all to get things implemented and prescribed.  Hopefully, with a slow but steady pace…..we can get all recommendations in place as quickly as possible.  So, that’s the plan friends!  And we are so prayerful and hopeful that doing these things will make a difference and help life in that precious little body for our incredibly sweet boy much, much more bearable.  One friend said to me that she was so sorry we had gotten the misdiagnosis of Gastroparesis. But you know what?  I’m not.  It’s unfortunate but not terrible.  If it hadn’t happened, we wouldn’t have ended up in Ohio.  If we hadn’t gone to Ohio, we wouldn’t have this totally new plan. This new plan with the fresh perspective we’ve been craving for years.  The Manometry tests that were performed there are not done many places and gave us the specific data to know once and for all what is really going on.  Every difficult test and procedure was necessary information.  In short, this trip was part of God’s plan for Cannon.  We are so confident in that!  We are thankful for it!  We got the HOPE we were looking for!

One last thing…..I’ve said it before and I will say it again……y’all are awesome!  The absolute outpouring of love and support for Cannon and our family has been so positively overwhelming!  The prayers have seriously kept us buoyant and strong as well as full of faith and hope.  AND THEY WORKED!  We are just so incredibly blessed!  We have had donations via a couple of sweet friends doing fundraisers through their respective businesses.  AND from strangers and even one anonymous friend!  Seriously!  How could one be more blessed?!  I just don’t know!  We do not have the words.  Plus, we have had so many precious gifts given to our family.  Thoughtful, heartfelt gifts that have provided us with things like hot chocolate on frigid days (Starbucks gift cards),  fully bellies (snacks galore in the hospital), warmth (handmade blankets for our boys),  distractions (toys, books, games, and entertainment), discounts (on meals and more), and tokens of support and love (a wall hanging made by a new, creative friend in honor of our “year of hope”).   Until I can get around to each and every one of you…..please accept this faulty, mass, cyber thank you for all that y’all have done to support, encourage, bless, and love on us during this time!  It will never be forgotten!  God bless you ALL!