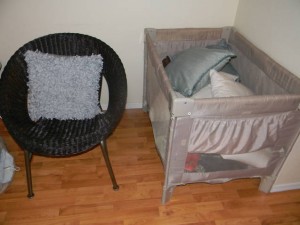 To some, this may look like a messy playpen.  To us, it is a happy accident.  To Cannon, it is a sensory haven!  This playpen has almost always been in our living room since Cannon was born.  When he was a baby, it was a great place to play with his toys and just hang out.  He took some naps in it.  I would also drag it back to our bedroom when I needed to take a shower.  It disappeared for a bit but when Townsend was born…..it reappeared.  And Townsend used it for all the same reasons.   But then he got a little old for it…..yet it still sat there for whatever reason.  Collecting dust.  In early Fall, I got new pillows for the couch.  I was out of closet space to put the old ones in so I threw them in the playpen until I could figure out where to stuff them.  A month or so later (I know, I’m a slacker), Cannon was having a particularly rough day.  Totally over-stimulated and out of control.  Bouncing off the walls and crashing into everything.  I was watching a football game with a friend when Cannon ran over to a chair that sat next to the playpen, got up on it, and used it to propel him into the playpen.  He dove under all the pillows and just laid there and played with the toys that still remained at the bottom.  It was the quietest and calmest he had been all day…..and lasted quite a while.  He got out a couple of times and then repeated the process.  Later on, he was so relaxed and we realized the beauty of this “happy accident.”  By jumping in, crawling under the pillows, and laying there with the pressure on top of him…..he was getting the sensory input he was seeking and didn’t need us to figure out how to help him get it.  I also think since he is too long for it, stretching out into it and feeling the resistance from it…..helps.  I don’t even remember who dubbed it “The Cave” but the name sure stuck.  Now, on days when he is particularly out of whack, we tell him…..”go jump in your cave.”  He loves it and It always seems to help…..to some degree.   His favorite use is as his #1 preferred hiding place for Hide and Seek.  He’s easy to find though…..just listen for the giggling.  😉