In my recent post about last year’s Surfers Healing Dinner, I told y’all about the amazing gift we received from a volunteer at that event.  A surfboard to display in Cannon’s room! I told you about how the gifting happened. About the kindness of 2 strangers who, while moving cross country, drove it to us in a 2 door sports car.

Soon after the event last August, I saw a photo.  A photo that made me wonder.  See, the board we were given had a black and red checkered pattern that was weathered from, no doubt, many great waves.  And the surfer’s name was written on it.  I wondered if painting it was an option.  Just to make it match better in his room.  And then I saw this photo.

Surfers Healing was having an annual auction to support the org. Professional surfers, surfboard designers and companies donate boards to be auctioned off with all proceeds benefiting the organization. I looked through the pictures of the boards even though I couldn’t quite afford to bid on any. And I went crazy when I saw this one………. 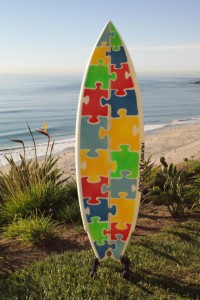 It was PERFECT! I fell in love with the idea of having a board with different colored puzzle pieces on it!  A symbol of Autism.  It would be a way of blending these two big, defining things in Cannon’s life. His Autism and his love of surfing. And with the board set to be displayed in his therapy room. The room that was specifically designed to encourage, strengthen, and comfort him.  It would make it that much more perfect of a space!

Well recently, I saw some artwork that a friend of a friend had done. It was pretty fantastic! So, I decided to send her a Facebook message and ask her if she was interested in trying to paint the board we had. Not really being sure that it was possible to paint a surfboard. She responded back “YES” immediately and I really got excited. We messaged back and forth a bit about the surface of the board, the desired design, and a time when I would drop it off. I thought I was settled on the exact design from the pic. Until I was leaving to drive it over. I decided to grab a pillow sham from his Pottery Barn Island Surf bedding set as I was running out the door. When I arrived, I was totally unsure.  She got started sanding and priming and we finally settled in on a design a couple of days later.  To still do the puzzle pieces but with colors from his bedding.  And a few of those pieces would contain design elements from the bedding. Only a few….so as not to be too busy for Cannon.   I can’t believe it but I never got a picture of the designed side of the board before dropping it off and we both forgot to take “in progress” shots.  Except for this one…which was taken when it was close to completion…… 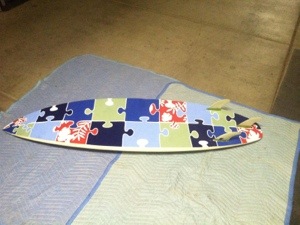 I asked Jessica, the artist, what steps were involved in this project and this was her answer.  First, she washed down the board and taped off the edges to make a “frame” of sorts. The fins were also taped. Three coats of primer came next. She penciled in the puzzle pieces and colored them in with the solid colors. Making a rough plan so she wouldn’t end up with 2 of the same colored pieces next to or touching each other. She, then, painted 3 coats of each solid color. After that, a fine brush was used to outline and edge between the pieces in white. This also took a couple coats. Next she drew in roughly what the pattern would look like and painted them in white. And went back with additional colors (yellow and red) adding accents and such. The fins were painted white. Finally, when it was bone dry, 2 coats of satin finish spray varnish were added and we had our beautiful “new” surfboard! 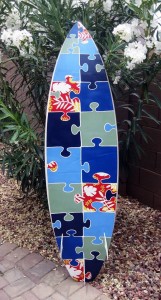 “I enjoyed every bit of this project,” Jessica said, “especially knowing that it was going to a very sweet and special little boy. I often think about whom I’m doing a project for as I’m doing it (its all about tailoring to fit the recipient as perfectly as possible), and really do mean it when I say each stroke came from a place of love from one mother (of little boys) to another. I truly hope Cannon likes his “new” surf board.” 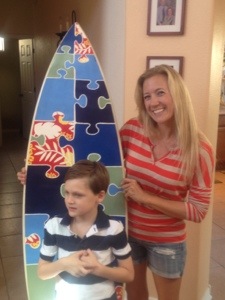 We don’t just like it Jessica!  WE LOVE IT!  It is perfection!  I couldn’t have even dreamed that it would turn out this fantastic!  We can’t wait to hang it and finally share pics of Cannon’s amazing therapy/bedroom with y’all!  Until then…….may God bless!!