Finally!  After months of fighting to make this post and especially, the video, the best it could possibly be….It is time for me to tell you about the single greatest experience our child, and quite frankly……our family, has ever had!

Several months ago, a friend sent me a video about an organization called Surfer’s Healing that sponsors day surf camps for kids with Autism. Her caption read “Isn’t this cool??!!”  I had never heard of them before but was entranced by the concept and became obsessed with finding out more and getting Cannon signed up. Weeks later when the email came that he was in, I jumped up and down, cried, and danced around with Cannon saying “You’re going surfing!”  I had been showing him youtube videos frequently of other kids participating in the event so he knew what I was talking about!  My excitement was through the roof because I just knew this day would be a powerful and special day for Cannon and our family!

Just incase you don’t know the backstory……Surfer’s Healing is a 12-year old organization started by former pro surfer Israel (Izzy) and his wife Danielle Paskowitz.  They are parents of 3 children.  One of which has Autism. His name is Isaiah and he is now in his early 20’s.  When Isaiah was a baby…..he was fine (like Cannon).  At one time, he even had about 50 words in his vocabulary.  But slowly and steadily that changed and he became virtually non-verbal and is now considered to be low functioning Autistic.  In attempts to connect in any way with his child, Izzy would put his son on a surfboard, paddle out into the ocean, and surf back in.  Being in the water had a calming affect on Isaiah, soothed his frazzled nerves and helped him to bond with his dad.  Through these times and experiences, the idea for Surfer’s Healing was born.  Put kids with Autism from all over the country on longboards with his pro surfer friends and allow the kids and families a day of pure magic. 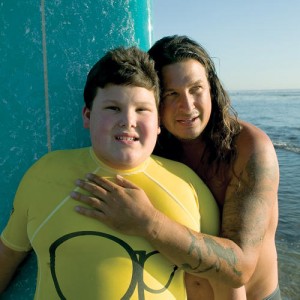 The morning of our particular Surfer’s Healing event was a little crazy.  We are not morning people.  Well, Cannon is but the rest of us…..not so much!  So, my sister went ahead of us to document the opening festivities which I had heard were pretty cool.  She relayed that the National Anthem was played by a guy with a saxophone.  That it was beautiful and was followed up with two exquisite prayers by the president of the Christian Surfer’s Association and a surfer from Puerto Rico who prayed in Spanish.  Then, Izzy said hello, thanked the volunteers, and told everyone to have fun!  All the kids were given a call time.  Cannon’s was 10:30.  Mark, myself, and the boy’s arrived around 9:30 so we had some good, “relax, get used to all the people, and process what’s going on time.”  We checked in at the registration tent, got a t-shirt, ate a snack, played in the water, and roughed up the sand for a bit. 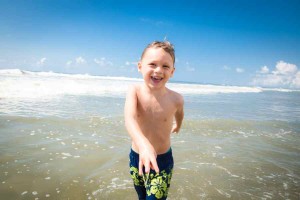 A couple of minutes before 10:30…..they called for Cannon’s group.  At the designated tent, a volunteer helped to choose and strap Cannon into a life jacket.  As soon as that was done, they respectfully asked me to part ways.   The walk down to the beach would be taken care of by them and they would introduce him to his surfer.  It is very nerve wracking for a mom like me to relinquish control and let a perfect stranger take charge of his safety.  VERY HARD!  But, I backed away after giving him a big kiss and hug and telling him how much fun he was going to have.  A couple of volunteers walked him down and helped Cannon to get onto the surfboard while the pro introduced himself and then positioned his body as well.  His surfer’s name was Duane and he has been surfing for 30 years.  He lives on the “Big Island” in Hawaii and also canoes.  As they began to paddle out, I noticed Cannon squirm just a little.  The volunteers repositioned him and I never saw him do that again.  They paddled out for what seemed like forever.  And so far out, too!  To the point where all the kids and surfers looked alike!  My family and I kept debating on which 2 were Cannon and Duane!  “They are right there!  No, right there!  There they go!  No wait, there!”

It took a while for them to select the perfect wave.  But when they did……..it was the most incredible sight I have EVER seen!  Duane stood up first and then lifted Cannon, putting him on his shoulders!  HIS SHOULDERS!  Can you believe the amount of strength, balance, and coordination that must require??!! 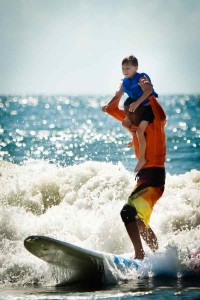 They rode in on that beautiful, sparkling wave smoothly and I couldn’t believe the ease with which Cannon was accepting this new thing and the incredible smile on his face!  A smile that I have never seen before!  It was shear bliss!  The most complete happiness!  Total genuine joy!  We had found the thing that could give his body all the stimulation it needed, allowed it to let go of all the tension it harbors, and literally gave him the ride of his life.  I became so emotional!  I was smiling and crying at the same time.  My hands gravitated to and covered my mouth as I watched in awe.   I knew this moment would be profound but it still managed to blow me away!  And my mind would not stop flashing back and forth!  Flashing from the amazing picture unfolding before me to a picture of my angel struggling, in pain, and restrained in a hospital bed with all kinds of tubes and wires attached. 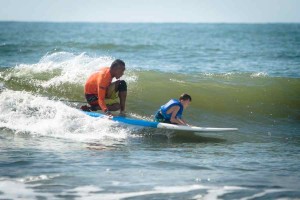 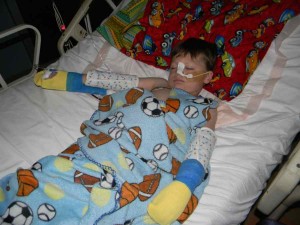 The difference in the two pictures was startling and fantastic!  My sweet and precious son has been through so so much!  Hours upon hours of rigorous ABA, PT, OT, and Speech therapy, multiple hospital stays and procedures for his related G.I. woes, along with countless E.R. and doctor’s visits.  As they got closer to the shore, Duane took Cannon down from his shoulders and placed him in a standing position on the front of the board.  I remained in a state of shock!   My FOUR YEAR OLD CHILD WAS SURFING!  His entourage on the beach was screaming like crazy people!  Telling Cannon we were so proud of him, we loved him, and what a great job he was doing.  Duane pointed the surfboard back towards the surf and they paddled back out.  Cannon was totally compliant and you could tell he was giggling!  They rode at least 7-8 more waves in various positions.  On Duane’s shoulders, standing, laying down, and on his knees.  They even wiped out once but Duane took Cannon right back out.  I said “I love this guy!”  I was so grateful that he was showing him literally and figuratively that when you fall down, you get back up and do it again.  That’s life!  The single biggest thing I will remember about this day was “that smile.”  I could never possibly express what it meant to witness it, how beautiful it was, and the pride that rushed through my body.  It was INCREDIBLE! 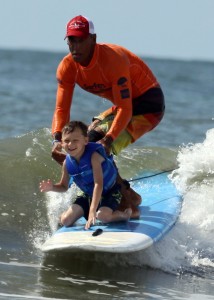 When his surfing adventure was over, I ran over so excited and gave him a huge hug!  As I was assisting the volunteer with removing his life preserver…….another unbelievable moment occurred, one of the best moments of the day.  My son, who talks with very very little functionality.  And so very rarely comes up with anything on his own.  And certainly doesn’t come up with whole complete thoughts by himself, said to me, “Mommy, I love surfing!”  I just scooped him up and cried like a baby.  I was so insanely proud of him at this moment!  IT WAS THE BEST FEELING!  I could never thank the Surfer’s Healing family enough for the many, beautiful gifts this day gave our family!

I, then, threw my arms around Duane.  Again…. I know…..I’m such a baby……., I cried (but I think he was a bit tearful as well).  I told him how hard half of Cannon’s precious, little life has been, how difficult it has been for our family, and tried to put into words how much this day meant to us.  How much we were starved for a day of such joy!  I thanked him profusely.  Duane told me how calm, sweet, and polite Cannon was the entire time they were out there.  (He sure makes his Momma proud!)  We took a few pictures with “Mr. Duane” and then said our reluctant goodbyes.  Finally, Cannon was escorted to an area of the beach where he was given a medal for participation and provided with a photo op in front of a surfboard.  He seemed very proud of his medal and actually stood still and smiled for the camera.  (You have no idea how incredibly rare this is!  Like it’s the one time…..ever!  Not kidding!)  When that was over, so was our beautiful day.  And we packed it in.

Later that evening, we came back to the beach for a dinner thrown by a nearby hotel in honor of Surfer’s Healing. It was a nice event and we got to see and talk to Mr. Duane some more.  We had gotten him a thank you card and printed a couple of pictures from the day for him to keep.  Cannon struggled to deal with so many people in one room so for the most part either Mark or I was walking with him up and down the halls.  We were sad we never got the chance to thank Izzy.  We saw him but didn’t get the opportunity.  I am so very sure he hears what we had to say all the time but on the off chance these words ever reach him…… “THANK YOU IZZY FOR THE MOST INCREDIBLE DAY!  WE WILL NEVER FORGET IT AS LONG AS WE LIVE!  THANK YOU FOR GIVING A MOM WHO, OFTEN TIMES, HEARS NOTHING BUT NEGATIVITY……A MOMENT OF PURE PRIDE AND PROOF OF WHAT IS POSSIBLE!  YOU ARE OUR HERO!”

That night, as I was getting Cannon ready for bed, I handed him a picture of he and “Mr. Duane” during their surfing adventure.  He smiled, said “riding the waves,” and climbed into bed.  Later, when I came to check if he was asleep, I found him doing just that…….all while hugging his special picture of his incredible day!  🙂

I have decided to redecorate Cannon’s room.   And what theme do you think would be my obvious choice??!!  Surfing, of course!!  I want my son’s room, his refuge….his oasis, to surround him with what he CAN do.    Because his entire life he will fight the battle of people thinking he can’t do some things…..just because he has this Autism label.  And I want him to know and never forget……HE CAN!

Now, I’m done!  I promise!  Go, watch the video!  It’s awesome!  And will truly give you a slice of what our amazing day was like!  PLEASE feel free to share this post, video, and/or blog with your friends!  I would love for as many people as possible to see what an amazing organization Surfer’s Healing is!  Love to ALL!