We hate having to go to the hospital all the time for clean outs.  I hate the smell of the Go Lytely solution.  Watching Cannon struggle to get free and calling “Save me!” while being masked in Anesthesia.  I hate every x-ray that comes back not clear.  And I hate that it takes 3-4 times the amount of medicine it takes an adult to get clear.  But at least we know what to expect, we know all the procedures and potential complications. But today was a new day.  We had no idea what to expect.  This was unchartered territory.  All I knew was that I loathed this day.  I never wanted it to come.  I prayed hard that it would never come.  But it did.  And I was know forced to put my faith into action and trust God that this was the right thing for Cannon.  And that He had a plan.

Our day began around 5:15.  We needed to leave by 6:30 and I still had a lot of packing to do. I got both boys up and settled watching Mickey Mouse Clubhouse and playing with my mom before jumping in the shower.  Ahhh!  My thinking place.  It is the only somewhat quiet place in my life.  I get a lot of thinking done here.  To-do lists.  Sorting out problems.  Brainstorming ideas.  It is also where I cry.  And this morning, I cried A LOT.  Cannon is very intuitive.  He picks up on things even though he may not know how to respond or react to what he picks up on.  And he can turn around and show signs of anxiety or upset.  I need to be strong for him.  So I try to get my emotions out as much as possible when he is not around so as not to do that.  But even with that release, he was still tense and very anxious this morning.  When we were about to leave and he saw the luggage by the door, he ran screaming through the house, “No, no, no HOSPITAL!”  Pretty much broke our hearts.  Mark had to chase him down and kind of force him into his car seat.  I got in the car and then had a thought.  I ran back in the house to grab paper and a Sharpie.  And penned this……. 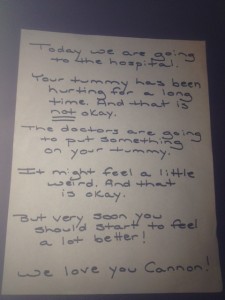 This is called a social story.  These are a tool used with kiddos like Cannon to help them understand when something difficult or confusing is going on.  Social stories are helpful because we are just never truly sure whether Cannon is listening and comprehending when we speak.  But he loves to read…..so the information is getting in there in at least some capacity. The premise behind them is to explain with minimal but specific detail what is going to happen, why, what it will feel like, and buffer it with positivity.  The ultimate goal of the story is to increase the individual’s understanding of, make him more comfortable in, and possibly suggest some appropriate responses for the situation in question.  We have used them sparingly in the past.  Not enough for sure.  And usually think of them after the fact.  But not this time….thank goodness. I was amazed that after he read the words through the second time in the car…..his meltdown ceased and never resurfaced.

When we arrived at the Surgery Center in the hospital, we checked in, filled out paperwork, and waited for what turned into hours.  His surgery was scheduled for 8:50 and we were to arrive at 7:30.  Well, there were “logistics” problems with the surgery before his which pushed Cannon’s start time all the way back to almost 11.  When they called us to go from the Surgery Waiting Room to Pre Op…..Cannon got anxious.  So, we pulled out his social story and read it through twice.  He then allowed me to guide him down the hall.  After all the Anesthesia paperwork was signed, he was getting anxious again.  So, we read the story through one last time.  And then downed an oral sedative cocktail via syringe.  But Cannon managed to leave us all cracking up before heading off to sleep.  He said, “Let’s get some shut eye!”  I mean…..are you kidding me kiddo??!!  It was HILARIOUS!  Not sure where he got that one but it was an outstanding one liner.  The Anesthesiologist said, “Yep buddy, I AM the Sandman!”

It was now time to wait again.  The surgery should take about an hour and a half.  I admit.  I broke down.  I cried A LOT.  The thought of them poking holes in my baby.  Leaving scars that will be there forever on his precious 5 year old body.  It was a hard pill to swallow.  We tried to busy ourselves with calling family, checking email, grabbing lunch, etc.  We also wrote another social story to help Cannon when he woke up and had a wonderful visit from our beloved pastor.  It still felt like forever.  I’ve said it before and I’ll say it again……I just can’t believe it came to this.  Here was the second social story….. 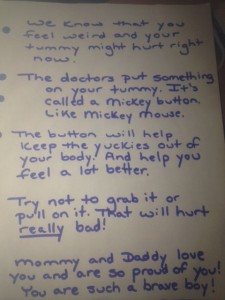 When the surgeon surfaced, she called us into a small room and shut the door.  She presented us with 2 boxes and a photo.  The photo was of the work done on his colon.  The boxes where Mic-Key buttons.  They had ordered the regular and mini sizes for Cannon’s surgery as they were not sure which would best fit his small body.  The mini didn’t fit but she wants us to hold onto it as it may in the future.  The other box had housed the button that now resides in my child and also the tube that will be used to flush him.  She said the surgery had gone well and all had been accomplished.  She also expressed grave concern over whether he would be able to tolerate the button and whether this was truly going to solve his problem.  She had watched me struggle just to get his ID band on his ankle earlier and really questioned things even before operating.  The surgeon also thinks that there is more going on than what we think.  She recommended another test that has been brought up before to test for bacterial overgrowth.  We have discussed this before with our GI doc but it is a virtual impossibility due to the requirements of the test.  Per my memory, you have to blow into a machine for an hour.  A tall order.  I remember our speech therapist at the time telling me her 13 year old daughter had had to do it and struggled.  So, I don’t know.  We will see what they decide to do. I am just focused on the button right now.  Hoping and praying that it WILL work.

While I was waiting today, I was searching for strength and the ability to cope with what was happening along with what was to come.  I thought of 2 verses.  One is my life verse.  The one I always look to for obvious reasons.  “I can do all things through Christ who strengthens me.”  Phillipians 4:13  This verse has helped me through so much.  Training for the Junior Olympics back in the day, my first couple of years teaching and coaching, and the loss of my first pregnancy to name a few.  It says it all and is my “I think I can, I think I can” type mantra.  The other verse I love is Isaiah 58:9 which says “Let me seek more than reasons, your wisdom; more than answers, your approval; more than peace, your blessed presence in my life.”  It is just a great encourager to try not to search for why….just trust God’s plan.  To try not to figure it out yourself, to seek to please God.  And rather than to strive for peace in your life, to just seek to have God in it.  And all will be ok.  I also listened to a particular song a few times.  It is called “Waiting Room” by Jonny Diaz.  I am so thankful for the honesty and encouragement in this song.  My favorite lyrics are “During this time Lord, I must keep in mind that you’re always wiser than I.  Because you have a much better purpose and you have a far greater plan and You have a bigger perspective cuz you hold this world in your hands.” The first link is Jonny himself explaining the song.  And the second is a lyric video of the actual song.   I pray the words will mean something to each of you, no matter what you are going through.  Here it is……..  Be blessed!

4 thoughts on “Off We Go Into Unchartered Territory…..”