I keep a notebook on Cannon.  Every day I write everything that goes in his body and everything that comes out.  I also make note of behavior changes, doctor visits, therapy reports, and any different meds given that day.  Because Cannon does not use enough functional speech, we have to rely on behavior to tell us how he is feeling.  On April 8th, I began noting that he was very “overly sensory seeking.”   Everyday this continued and was coupled with new symptoms.  Some of which include loss of vocal control, literally bouncing off the walls, irrational and overly emotional behavior, loss of appetite, more “stimming” and “scripting.”  Our dead giveaway symptom is when he runs full speed into the arm of the couch so that it hits him square in the stomach.  When I see that symptom consistently, we head for the hospital.  This time was no different.  I rushed to pay some bills and pack a few bags.  Then, we were off to the Emergency Room.  We waited in the Waiting Room for about an hour and a half.  This was quite hard and produced quite a lot of yelling and screaming.  I got a few glares.  Oh well.  I fed him snacks, helped him color, and played with some of the toys with him.  Finally, we were triaged.  They always tell me he has good bowel sounds and look at me like I am crazy.  Cannon can look perfectly healthy and be impacted.  It’s a tricky part of all of this.  It is just so hard to tell.  When we got a room in the E.R., we were assigned a nurse we had had in there before so that was nice.  The doctor ordered the abdominal x-rays along with a chest x-ray.  Cannon had an episode a month ago where we thought he might be impacted but it turned out he had no-symptom pneumonia.  So, we wanted to check and be sure it was gone.  When the results came back it showed that the pneumonia was gone but there was “significant stool load throughout but predominantly in the ascending colon.”  This area of his G.I. tract is a real thorn in our side as it is the sight of the worst of previous impactions.  My understanding of the problem is this.  The ascending colon is where poop goes first in the colon.   Your colon gets stretched out when you get impacted and can take anywhere from 2 months to a year to shrink back.  The impaction also causes the muscle to lose the strength it needs to push things through.  So, some gets stuck and some keeps moving.  It’s called “overflow.”  Cannon has been so impacted so many times that his colon is really stretched out.  Especially his ascending colon.  So, we get him cleaned out and fairly soon after he gets re-impacted.  It’s a vicious cycle to say the least.  So, the staff knew he had to be admitted.  They decided to start his I.V. and put the “NG” tube in down in the E.R. instead of upstairs.  They have better resources down there.  So, they did this and put him under conscious sedation to make it bearable for him.  It’s always scary to do the partial sedation but we know it allows him to suffer less and one of the drugs they give him during this process helps him to not really remember the experience.  He rested comfortably for most of the night after this.  They will continue to keep him on a scheduled dose of valium until the cleanout is over.   I opened up my Bible this morning for a little recharge and this verse jumped off the page at me.  “Consider it pure joy, my brothers, whenever you face trials of many kinds, because you know that the testing of your faith develops perseverance.  Perseverance must finish its work so that you may be mature and complete not lacking anything.” James 1:2-3……..It was just what I needed.  Tomorrow will be ROUGH.  The “results” of the cleanout will come fast and for a very long time.  And I will do it alone for the most part as my husband will be home with Townsend.  God always gives me the strength even though it is hard.  I am not too worried! 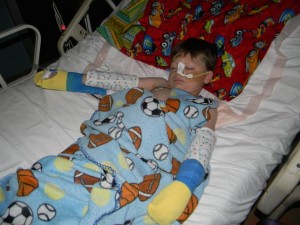 4 thoughts on “Day 1 in the Hospital”