Last week, Cannon had to go into the hospital for another procedure…..a Barium Enema.  This is the last of 2 tests the surgeon ordered to help him determine what surgery to do on Cannon.  We had to be at the hospital at 8:15 for the 9:15 procedure.  He couldn’t eat after midnight nor drink after 7 a.m. due to the fact that he would require sedation.  We arrived on time, checked in, and were taken to our room.  Thank goodness for our brand new ipad (which I will blog about soon!)!   It kept him occupied while we waited and helped him deal with his anxiety.  Every time a nurse or doctor entered the room, you could see him visibly tense up.  His voice also got louder and he wanted to snuggle a lot and hide behind me.  Even the Child Life Specialist who was with us commented on it the incredible tension in his little body.  So, we allowed him to play the ipad as much as he wanted.  His apps of choice that day were a bongo drum app, memory game type app, and a fill-in-the –missing- letter app.  The nurse immediately put some numbing cream covered by a large, clear sticker on the inside of his elbows.  She said this would help when it came time to start the I.V.  This has been tried on previous visits and I told her the stickers would bother him more than the I.V.  It’s just one of those sensory things that don’t necessarily make sense.  He continually responded the way I predicted for about 10 minutes……so she eventually took them off.  I also told her that he and the I.V. always do better when you place it on the front of his forearm rather than the other spot.  They checked for veins and saw that I was right.  They were juicy veins!  So, when it came time to put it in……they listened and put it where I suggested.  There was a nurse to stick, a nurse to hold the arm to be stuck, a nurse holding his legs, I held his upper body, and the Child Life Specialist tried to distract him with the ipad.  Eventually she even had to jump in and help hold him.  It takes a village to get an I.V. in my kiddo!  He is freakishly strong!  But once it’s in…..and you stay vigilant with watching him like a hawk so he can’t pull it out……he does okay.  The doctor then came in and explained the procedure.  It wouldn’t take long, they decided to use a different contrast besides barium (honestly can’t remember why), and that I could stay with him if I wanted.  I chose to…. even though I wasn’t sure I wanted to.  When it came time to start, I carried him to the procedure room while the Child Life Specialist followed closely behind showing him the ipad all the while.  He was following along and reading the Dr. Seuss story “Hop On Pop” at this point.

When we got to the dimly lit room, I laid him on a long table with a huge x-ray machine above it and they began to push the I.V. medication to sedate him because he got very upset!  Even with the ipad.  It took a few minutes but eventually, he got sleepy.  I was put in the heavy anti-radiation gown along with an extra piece that covered my throat.  Cannon played the ipad till the end.  And it was so funny!  He was even reaching for it once his eyes had closed and he was almost completely out.  🙂  Once he was down for the count, they began placing the tube.  I think you can guess, even though you probably don’t want to, where that one went.  The doctor then came in and they got started.  There were several nurses, the doctor, resident, myself, and the Child Life Specialist present.  My observation of what happened next was that the doctor would squeeze a small bulb that was connected to the tube inside Cannon.  This allowed contrast in….a little bit at a time.  Then the machine would take an x-ray.  He would squeeze a little more, another picture was taken.  And so on and so forth for about 15 minutes.  Then, they removed the tube and attempted to drain some of the contrast.  I asked the doctor if he saw any evidence of an impaction (because his behavior as of late had been somewhat consistent with that).  He said he didn’t see an obstruction.  I informed him that Cannon doesn’t get obstructed but gets horribly impacted.  He never answered and the nurse told me later that that is not his job.  He administers the test and evaluates the results….. but that is not what he is looking for.  She said I needed to call our G.I. doctor for him to look at the films.  We called his office and are STILL waiting to hear back.  We then went back to our room to wait for him to wake up.  The nurse told me it would be about 30-45 minutes.  I told her how they said the same thing at his last procedure and he was asleep for 4 hours.  After 2 hours with not so much as a stir, they began to try and force him to wake up.  The cold wash cloth was the thing that finally did the trick.   Once he showed that he was really awake and would drink something…..we were free to go.  The report from the procedure was finalized before we left the hospital but we have to wait to meet with our incredibly busy surgeon before we get to hear the results.   Hours later, Cannon was in terrible distress.  Presumably from the lingering contrast in his body.  He screamed like crazy in a squatting position for an hour and a half.  I was in shambles!  I was just about ready to rush him back to the hospital.   Our last idea was to try a bath.  He wouldn’t sit down.  Just screamed the loudest scream imaginable.  So, we turned on the shower.  After allowing him to stay in there for about 20 minutes…..he relaxed somewhat and at least the screaming stopped.  You could still tell he was in pain but it wasn’t as extreme as earlier.  We were so thankful.

However, Cannon’s behavior is deteriorating.  It may be that he is approaching another impaction.  Or it could be that the tapering off of the seizure meds is hitting his little body hard.   We know for sure that the lack of meds is causing him to sleep about an hour and a half less each night.  4:30 a.m. is his new wake-up time.  This was the norm before he began this particular medication.  Also, due to Cannon’s language delay, we have had to use behavior as our way to evaluate how his tummy was feeling.  Now, we are seeing all kinds of tough, new, and complicated behaviors that were being suppressed by the seizure meds.  Along with a harsher version of all the things he normally does when he is not feeling well or impacted.  So, it has become incredibly difficult to tell what is going on with him.  We met with our neurologist last week to discuss the headaches that have come out of nowhere, the increased behavior and staring spells, and what to do about the seizure meds.  She wants to continue the tapering off.  She said we need to brace ourselves for the tough behavior but that we have to give this a fair shot.  To be absolutely sure before we do surgery that we tried everything.  Next week, it will be time for him to come completely off the seizure meds.  So, his neurologist has decided to put him in the hospital for 2-3 days to monitor him.  They will hook him up to a 24 hour EEG and put him in a room with cameras.  So, if he has a seizure….he will be in a safe place and we will know exactly what we are dealing with.  She thinks the headaches are either bad heredity or a result of the med change.  And the staring spells could be a behavior or a seizure.  It is impossible to tell or know without an EEG hooked up.  Here is a pic from his last 24 hour EEG.  So, you can see what it looks like.  We were able to go home with the machine in January when this was done.  This time will be different.  He will have to stay in the hospital room for the length of the test. 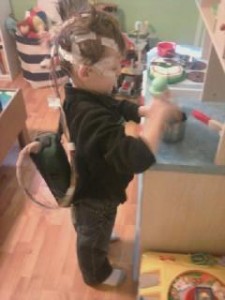 I have a Scripture Verse A Day calendar in my kitchen.  Today’s verse was from Hebrews 13:5-6 out of the Message Bible.  “Since God assured us, “I’ll never let you down, never walk off and leave you,” we can boldly quote, “God is there, ready to help; I’m fearless no matter what.  Who or what can get to me?” I was blessed with the strength that radiates from these words!  God bless each and everyone who reads this (even the spammers!)!