This is going to be a bit short and sweet.  For me.  I am so tired and not even sure if this is saving as the internet here has been spotty. 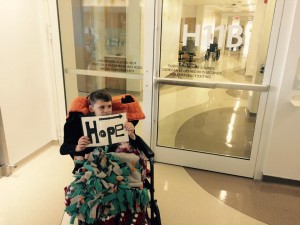 We arrived at Nationwide this morning for our 8 a.m. check-in.  All went well getting paperwork done and finding our way up to our room.  We set these next to his bed to remind him how strong he is. 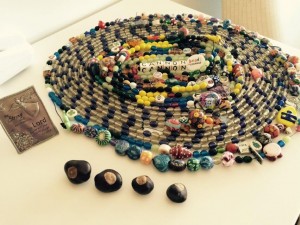 Orders for his Go Lytely solution were already in upon arrival.  The first praise of the day was that I WAS able to get the docs to agree to put the solution through the Chait Button in his abdomen.  NO NG TUBE!  Such a relief!  Upon sharing some background info with our nurse…..she decided to go ask the docs if we were able to keep him drinking consistently…..did he really NEED an I.V.?  They agreed to hold off as long as he drank and kept it down!  AND HE DID!  This was huge!  And another fantastic answer to prayer!  The Fellow (who is an Attending in his own right…..just doing a rotation in Motility) came in to go over Cannon’s history.  Mark and I had gone through all my notes from the last year the previous night and had a really good timeline down as well as a good list of current symptoms.  I felt so very good after talking with the Fellow.  He was a great listener and really seemed to get Cannon and be so very caring.   All the while, the solution was running, running, running through my boy.  And no “results” were being produced.  It took several hours before he even produced one diaper’s worth.  And then his Chait Button began leaking at an alarming rate.  So, they disconnected him from the Go Lytely and gave him a break for a bit.  Eventually deciding we should do a cleanse with the medication we do for at home, daily clean outs on top of what they had already done…… but with their equipment.  So, the nurse got everything ready and ran that through his Chait as well.  But because it was going through an I.V. bag, tubing, and pump…..It took much longer.  About 10 minutes when it normally takes us less than one to put it in via catheter syringes.  The “results” began and remained fairly constant for a while.  When they seemed to be done…..we took a walk around the floor and ended up in the playroom. 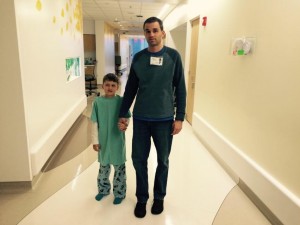 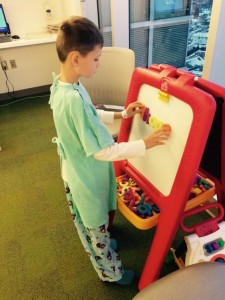 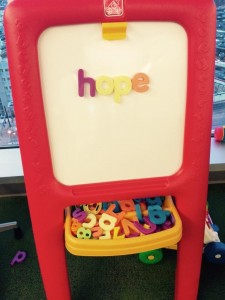 We had been there about 5 minutes, when he had some more “results” and we had to return to his room.  A sweet volunteer stopped by right after we got him cleaned up and offered to play a game with him.  He played a sweet Daniel Tiger game with her and was talking back to her well. 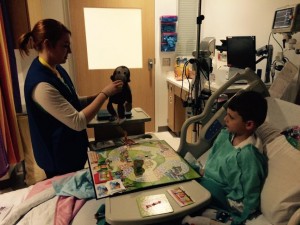 The art cart stopped over and left some paint and a wooden whale carving to paint.  He enjoyed this and then went to sleep.

There were some decent downs to this day.  From sun up to sun down, Cannon was incredibly, incredibly anxious.  I am not sure a minute went by all day that he wasn’t begging us to take him home or back to the RMHC.  He cried “rescue me”, “save me”, “help me please mommy.”  All the things that break my heart and are accompanied by sad, sad eyes and crocodile tears.  I felt like we were just getting him through this minute without completely losing it….. and then the next….. and the next.  It was a marathon…..today was.  And then there was our initial meeting with a very important doc.  After speaking with the Fellow, I was so encouraged.  This place is going to really go to bat for him.  Really pool all their resources and get this thing figured out once and for all.  After 5 long years…..we are going to put this pain and lethargy to bed.  BUT……let’s just say I was caught quite off guard by the next doc we came into contact with.  I would prefer not to get into it.  I was so stunned and dumbfounded by him…..his questions…..his take on what might be going on with Cannon.  Completely dumbfounded.  And so, so disappointed.  We have waited almost a year and looked so forward to meeting HIM.   At one point during the conversation, I even feared he might pull the plug on the whole thing.  It was…..I don’t know……Just not even in the ballpark of my expectations.  I am trying, in my heart, to just chalk this up to poor beside manner.  It really wasn’t that but I am trying to tell myself that so I can remain positive.  It is time to trust and let God work.  Let the results of the tests speak for themselves……and then go from there.

Tomorrow morning at 8 a.m. the fun really begins.  They will take him down to Interventional Radiology and put him to sleep.   He will have several catheters placed in his colon and stomach.  These catheters will stay in for most of the day and they will measure and give data based on their contractions.  They are looking to see if there is a weak link, if his stomach is working together well or not at all.  Tomorrow evening, as he is going to sleep……they will place another catheter…..let’s just say “where the sun don’t shine” and measure those contractions.  All this information, per my understanding,  will confirm or deny his Gastroparesis diagnosis and/or show if there is nerve damage.  And they say this will be uncomfortable and he will have to tolerate it.  Wanna hear a 3rd praise of the day?!  Cannon’s Chait Button has to be removed tomorrow to place one of the catheters.  And I jokingly…..but not really jokingly…..mentioned that they could just replace (that’s “replace” not “re-place”) it when they went to put it back in.  It has to be replaced yearly and he is due for it in the next month or so.  They think that they CAN!  This would save Cannon from having to go through another surgery when we get home!  And us the drama of figuring out where to do it and which doctor to do it back home.  You may remember if you’ve been following our journey that this surgery was botched last year and had to be re-done later.  We do not want a repeat performance and are so grateful that they just might do it here. Where this procedure is done VERY regularly!

Specific Prayer Requests of the Day……

1) That they will agree to NOT put the I.V. in first in the morning.  That anesthesia will put him under and THEN they will place the I.V.  This saves him so much anxiety, fear, and discomfort.

2)  That he can tolerate the discomfort of the contracting catheters and that the results will be accurate and clear.

3) That they WILL replace his Chait Button tomorrow when they remove the catheters.

4) That the doctor’s heart will soften towards Cannon and that he will use every ounce of his ability to figure out what is causing his pain and lethargy.

That’s all for tonight folks!  I’m wiped!  I sure hope this posts!  WE LOVE YOU ALL!!!!  YOU BLESS US BEYOND MY CAPACITY FOR WORDS WITH ALL THE SUPPORT!

One thought on “Ups and Downs”