I have to share some wonderful news with you blog family!  Something so out of the blue but fantastic happened on Sunday, May 10th.  Something we have agonized over, prayed for, wracked our brains over, and just been down right frustrated with for years…..finally, finally, FINALLY began to resolve!

For 6 1/2 years, we have been trying to potty train Cannon. We tried every conventional method.  We tried every out there and bizarre method.  We tried every reward based program.  We tried outright bribing him.  We tried taking him to the restroom at predetermined time periods.  We tried collecting data to try to predict the times he was most likely to need to go potty.  We read him the boys potty books and watched the Elmo Goes Potty video until we both had it memorized.  We read many, many, many books, articles, and blog posts for parents, studied research, etc.  Everything we could get our hands on pertaining to this topic. We consulted various doctors as well as other moms of kiddos with Autism.  We feel like we tried absolutely everything.  But nothing, and I mean nothing, worked.

Our son had not one ounce of interest in the issue.  You could let him run around in just underwear (or naked) and he would relieve himself in either fashion…..no problem….anywhere.  He didn’t care.  You could ask him if he was wet and he would always tell you he was dry.  Even if the evidence to the contrary was literally rolling down his bare legs.  He didn’t care.  It had gotten so bad that our G.I. doctor was really questioning whether or not his body was communicating with his brain about when he needed to go.  He wondered if there was a disconnect and if he was even capable of being potty trained….ever.  We gave the issue some space but made it clear to Cannon that we knew he could do it.  And just kept believing as best we could.

I did my very best to hide this issue from his peers.  Because the couple of times it was discovered that he was still in diapers, he was teased badly.  So…..for example, during AWANA club time at our church, I would take him to an isolated restroom down the hall from his class while everyone else was outside.  That has worked mostly.  But I have gotten PLENTY of stares, glares, and questioning looks upon visiting public restrooms with Cannon.

May 10th was just like any other day.  Nothing was different.  Except that it just happened to be Mother’s Day.  It was in the afternoon……after church.  I went to the bathroom because Cannon had called to me that he needed a diaper change.  This alone had taken years to happen.  (Over the last year, he had begun to pee in the potty if you got him there first.  He protested and didn’t like it…..but eventually, he would relent and go.  And in the last couple of months….every once in a while he would tell me if he was wet and needed changing.  But that was it.  No news ahead of time).  So anyways…..on this day he called me and I went back.  When I opened the drawer where we kept the diapers….it was empty.  I needed to run grab some more from a stash in the Cannon’s bedroom closet.  But first, I did as I always do…..I said, “Would you like to wear underwear instead?”  To my complete and total shock…..Cannon said, “Ok.”  I almost didn’t notice at first.  I had grown so used to the emphatic “No!”  When I realized what he had just said I praised him like crazy and made a big deal about how proud I was of him.  I let him choose which pair he wanted to wear from the hopeful selection that I had.  Dinosaurs….he was very sure of his choice.  For the rest of the day, I reminded him every so often to go.  I offered sweet treats as rewards for a job well done.  And he DID!  FOR THE REST OF THE ENTIRE DAY!  (I cannot begin to emphasize that this was out of the clear blue after 6 1/2 years!!!!!!)  We did put him in a diaper at nighttime but I kid you not…..he stayed dry during the day until Thursday!  It was crazy!  Our minds were blown!

And then Thursday came and he had 3 accidents.  And he didn’t seem to care.  I thought…..well that was my bone.  He threw it to me… to give me hope…..and now we will go back to where we were.  I was disappointed but decided to try again Friday.  More accidents.  (And when I say accidents…..I mean big, bad, nasty ones.)  Sigh.  It wasn’t looking good.

But you know what…..we kept at it.  Kept believing in him.  I reminded him regularly of Phillipians 4:13 (“I can do ALL things through Christ who strengthens me.”) and I praised and rewarded that kid like a crazy woman!  I read him the potty books that had been gathering dust on the book shelf for years.  I took him out of the house in short stints in underwear.  Just so that I could praise him that much more when he succeeded.  And there were accidents.  But more successes than failures…..thank goodness.

The last week and a half, we set our sights on night time dryness. And all but 1 night…..he has met that goal.  And it is because of that…..and a virtually unblemished daytime record in the last couple of weeks……I feel confident in saying that our precious Cannon Luke is officially potty trained!  Yep!  He did it!  He’s AMAZING!

It’s even getting to the point where I can send him into a bathroom stall solo.  And then slip in after he’s done to make sure he’s got his zipper up.  While I’m standing there, outside the bathroom door…..pretending to hold it.  I want to scream to the other fellow bathroom visitors……Do you know how big this is??!!  I am on the outside of the bathroom door!  Cannon is going all by HIMSELF!  Yes, I’m a dork!  But, I don’t care!

AND, this week, during a meeting with our DDD (Department of Developmental Disabilities) Support Coordinator……I cancelled our regular diaper order!  And filled her car up with diapers to return!  Ones that we no longer need!  And that now can go to a family that they will bless!  AHHHHH!!!!  It was the BEST! 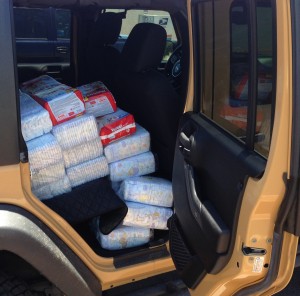 The moral of this story people…..especially my fellow Warrior Mommas……is don’t give up!  When the doctors tell you it may never happen.  When you have exhausted yourself, your family, and your resources trying to make it happen.  When your child just doesn’t care and you feel that they never will.  Even if he is 8 years old…..or older!  Don’t give up on them!  But more importantly, don’t give up on God’s ability to do a mighty work in your child.  Keep praying, keep believing, KEEP THE FAITH!  (Even if it’s a “fake it till you make it” sort of thing!)  Our kiddos may never cure cancer.  But they may get out of diapers gosh darn it!  And from where I am sitting…..that’s pretty great!  And for right now, that is my miracle!  My joy!  My proud momma moment!  My life changing news!

And the best gift he could have given me for Mother’s Day!  God Bless!