Yesterday morning, Cannon had to swallow a capsule.  And not just any capsule.  You may remember that his surgeon wanted him to undergo 2 more tests before he decided what surgical option to go with.  Well, this capsule is the first step of the first test.  The exterior capsule itself looks much like any other capsule you would see.  Clear and plastic-y.  But, the inside is bizarre.  There are, according to the instructions I received, “24 radiopaque polyvinyl chloride O-rings” inside.  He was to swallow it and the little rings will be released into his little colon eventually.  On Monday, we will go in for a simple x-ray, I am told.  The x-ray will be evaluated to see how many of the O-rings still remain and where they are located.  The info provided says that if you have “expelled” 80% (19) of the rings…..it will be determined that you have “grossly normal colonic transit.”  If one retains 6 or more, they will require follow up x-rays and anyone who has their’s accumulate in a certain part of the colon will need a cleanout and to repeat the test in a few weeks.  “To determine the location and extent of the elimination of the markers.”  He had trouble swallowing the capsule at first.  Spit it out 3 times.  But the 4th time was a charm and he got lots of hugs and praise afterwards for his efforts! 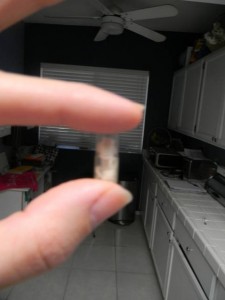 Cannon is also not allowed to take ANY of his motility medication for the next 5 days.  He currently takes 3 capfuls of a laxative, 3 capsules of one drug, and 1.25 ml of another daily for motility alone.  We are so concerned as he is already (27-ish hours later) in bad shape.  His sensory system is on overload, his behavior is terrible, he’s asking us to rub his tummy a lot, doesn’t want to eat, and his body isn’t “producing” much.   Yes, we may have answers at the end of this, but the in between time is going to be rough, to say the least.  I will not be surprised at all if he is back in the hospital when this is over.  Severe impactions can also be fatal.  But we would never not take him directly to the hospital if we thought things were in a grave place.

Cannon has also begun having headaches.  He had 3 last week so I called his pediatrician, as he has never had one to our knowledge before.  She said that some kiddos had been having a difficult time with their allergies lately with how windy it has been and with certain things blooming.  She suggested allergy meds and to call her the first of the week.   On Tuesday, he had 2 in the same day.  This morning, he had one as well.  So, I gave her a call once again.  She is concerned that it could be the result of us tapering him off his seizure medication.  But we are going to try a different allergy medicine before we go on assuming that.  Mark’s family also has some migraine history.  We are just praying that we do not have a new problem on the horizon here.

Yesterday, I practiced with Cannon for his second to last night of AWANA at church.  This is a program for children that contains a club atmosphere where they learn Bible stories, do crafts, memorize Bible verses, sing songs, play, watch a puppet show, have a snack, and also tons of fun!  He has had a blast being in AWANA over the last 2 years at our precious church.  He wears a special vest for his club meetings and has earned all of his patches for it so far by memorizing a verse a week and completing a lesson.  That’s 24 verses!  A lot for a 4 year old, I think.  Last night, they had a uniform inspection and he received a green ribbon.  He smiled from ear to ear and can’t stop talking about his “Riv-on.”  I am so proud that he has been able to accomplish all he has in AWANA……with all the ups and downs of the year!  In the beginning, he couldn’t relax and focus at club enough to sit still during story time and/or to say his verse.   So, I would video him saying the verse at home ahead of time and show it to the leader when we got there.   Now, he says them in a quiet corner with no problem, for the most part. And he will tolerate me sitting with him, keeping him on the carpet for most of the story time.  It may not sound like much but it is a big improvement.  Last night’s verse was James 1:22.  “Be doers of the Word and not hearers only.”  As I struggle with my doubts and emotions sometimes, I try to remind myself that I must do what God says and not just hear the nice words.  I must live out what I am reading …..and not just let it go in one ear and out the other.  I must remember …….” Do not be anxious about anything but in everything, by prayer and petition, with thanksgiving, present your requests to God.”  (Phillipians 4:6)  I can’t just talk about it…..I have to do it!  This is a tall order but all things are possible with God’s help!

2 thoughts on “The Crazy Capsule”