Well friends, our AWESOME run of avoiding the hospital has come to an end.  🙁  We had to come back in yesterday after a few weeks of evaluating Cannon’s behavior to determine that his tummy wasn’t feeling so good.  As you may remember, due to his limited ability to talk…..we have to use behavior as our gauge.  We look for things like insomnia, decreased appetite, intense increase in over stimulating sensory behavior, teeth clinching, increased stimming and scripting, firm belly, and crashing his stomach into hard things (like the arm of the couch).

We came to the E.R. yesterday and the x-rays showed areas of concern in his ascending and descending colons.  We were admitted to the hospital at that time and they began giving Cannon high concentrations of Miralax solution.  After 6 capfuls (1 is a regular adult dose) of this stuff yesterday, he had super limited to virtually no output and it was decided for certain that we had to go ahead with OUR usual protocol.  The hospital here often calls Cannon “the anti-protocol,” as they do nothing for Cannon… the same as they would for others.  For example, they never sedate just to put an N.G. tube in.  But with Cannon, it is just the most humane way to operate.  He is a strong and able fighter and can go many rounds (and win!) even with multiple adults trying to hold him down!  Therefore, we take him in the O.R. with his pajamas still on and give him the mask with the anesthetic for about 30 seconds-1 minute.  After he is asleep, they then put him in a hospital gown, hook up his I.V., place the N.G. tube down his throat into his stomach, and place the pulse ox on his toe.  They put socks over his hands and feet and tape them on.  And also something referred to as “No No’s” over his elbows to keep him from being able to bend them.  These are precautionary measures to hopefully keep him from pulling these things off.

So, yesterday we pretty much just came up with our plan and got a decent night’s sleep.  We were to be added onto the surgery schedule ASAP first thing this morning.  Well, just like last time……that still took a while.  Busy surgery day, I guess.  We didn’t end up having the procedure until 2 p.m.  And my poor little guy hadn’t had a meal since breakfast the previous day!  That was a bit hard but we spent our waiting time in the hospital playroom playing with toys and watching t.v.  We took a shower since that will not happen again until the cleanout is over.  We visited the library here and read and checked out some books.  Played with the interactive wall and just walked the halls.   Cannon decided to literally walk and walk and walk the halls.  Not sure if he was delirious or just had a lot of nervous energy.  It was kind of fun, though.  Like a walk down memory lane.  We saw so many of his former nurses and everybody wanted hugs and to tell Cannon how tall he was and how much older he looked.  I really like and admire all of these individuals for their kindness and for the spectacular care they have given my son over the last year and some change……so it was really nice to get to say hello to everyone. 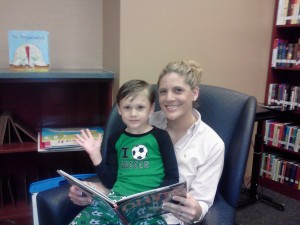 When we got the call to go downstairs, we did so and began consulting with the nurses and resident about how things would go.  I wanted to press for a certain anesthetic that we had had success with a previous time.  Because the last time he had to go under (well, every time except for once), he did not come out of it well.  He becomes violent and is incredibly impossible to deal with without high doses of drugs.  I was able to convince them to use what I wanted to some extent so I was somewhat content with that.  I am still kicking myself though because I forgot to request a certain size N.G. tube.  On a previous visit, he was given a size 10 feeding tube and was horse for a week after.  With lots of throat irritation as well.  We switched back to size 9 the last time and things went much smoother.  Well, I forgot to mention it this time until it was too late and the bigger size was put in.  Grrrrr!  So mad at myself!  It was in my notes and everything.  Oh well!  Not much I can do about it now.  I have decided to make myself a checklist for next time.  Of all the thing to request and ensure that they happen.  So, this won’t happen again.

He woke up okay from anesthesia but did end up getting agitated. But agitated not violent (an improvement nonetheless).  So the anesthesiologist gave him a little something to relax him.  And we came back up to our room.  However, that drug didn’t work and he got pretty upset.  So, some Valium was grabbed quickly.  Cannon takes a scheduled dose of Valium every 6 hours while he is here to keep him calm enough to tolerate the tubes.  (Another “anti-protocol” measure)  When that wasn’t enough and things got really rough, more had to be grabbed.  We still spent most of the evening riding the roller coaster of emotion with Cannon.  He knows what is coming and isn’t too happy about it.  But it must be done.  And he knows that, too.   The staff began giving Cannon the “Go Lytely” around 5:30.  This is the medicine that will be pumped in him by the gallon until his colon is cleaned out.  Generally, it takes each gallon 24 hours to go in.  Labs and new x-rays are done at the end of each gallon.  On the average person, 1/2 to 1 gallon should be enough.  But with Cannon, we have never gotten out of here without at least 3 gallons.  It’s just crazy!  And on the average person, they stop the medicine and wait for the x-rays when each gallon is complete.  But with Cannon, they keep it going until the results are in.  Because we know how unlikely it can be that the first couple of gallons do work.  More ways that Cannon is the “anti-protocol.”

I was able to take Townsend down to the cafeteria tonight for dinner while Mark held down the fort.  I really try to steal away a few minutes with him each day when they visit so he knows that he is important, too.  He loves it and knows that this means he is getting a treat!  Applesauce is a treat at home but in the hospital…..its usually a brownie or pudding.  And he milks it!   🙂 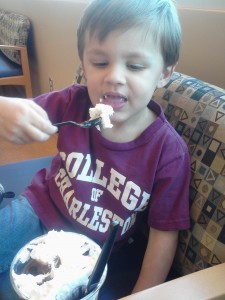 Well friends, we would appreciate your prayers as the next few days will be rough.  Dealing with the “results” of the cleanout are gross to say the least and pretty painful for my sweet boy.  We have prayed often with Cannon and reminded him that God is with him.  Giving him strength to deal with anything, loving him like no other, and giving us all hope.  We also thanked our Father that it has been over 4 months since the last time he was here!  Quite a victory for our family!  Praise God!   🙂