The evening after the Surfers Healing event of 2012, the Tides Hotel (whose beachfront hosts the event) also hosts a dinner.  Actually the Blu Restaurant inside the Tides Hotel hosts it.  Families, participants, volunteers, and surfers attend.  There is a fantastic buffet style dinner, entertainment, and a raffle.  My parents, sister, and my little family of 4 were all able to go and enjoy this time of celebration after such a great day at Surfer’s Healing!  This year’s dinner was much more crowded than last.  In fact, there were so many people there that the hotel had to set up a bunch of tables and chairs outside of the large banquet room to accommodate everyone. 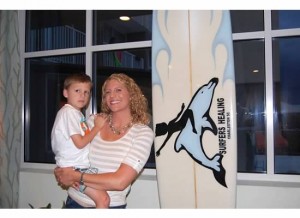 Cannon was a bit nervous from the get go.  It was obvious he “needed” an outlet to express his anxiety.  The amount of people, close proximity, smells of the food, so many people talking, or something was making him feel this way.  He goes through phases in regards to how he deals with stressors or sensory overload.  Phases where he might perform certain obsessive and/or repetitive behaviors constantly.  During this particular time, he was consumed with writing words in the air or on surfaces with his index finger.  Well, that night he was extra snuggly and also tired.  He wanted to be held.  He would cuddle for a few minutes and then sit up and write.  And then cuddle again and write some more.  And on and on.  I had told Mark to go ahead and eat first.  I would hold Cannon.  Well, Cannon decided he was going to write on me and not in the best location.  See for yourself…… 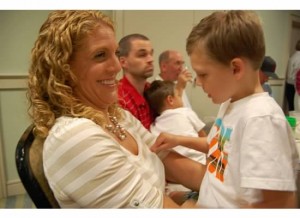 A little embarrassing!  And I could not get him to stop without meltdown.   He just eventually got so tired that he laid down on my shoulder for good and fell oh so very fast asleep.  Like snoring, mouth open, completely conked out sleep.  It was pretty hilarious! 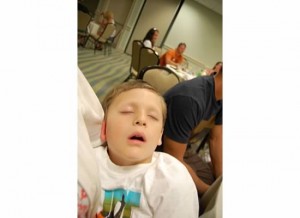 Izzy Paskowitz, the co-founder of Surfers Healing, who Cannon had gotten to surf with……wrote a book this past year.  It is called “Scratching The Horizon:  A Surfing Life.”  He was signing books at the event so of course……we had to have one!  This is how he signed Cannon’s! 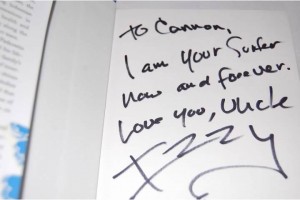 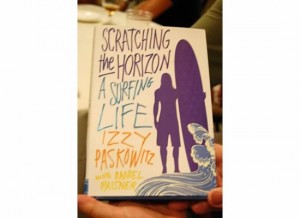 Pretty cool guy, huh?!  We had promised to bring Cannon’s Beads of Courage to the dinner so he could see them.  We were telling him about the org as he had never heard of them.  I think he was amazed with how cool the org is and how many beads Cannon now has! 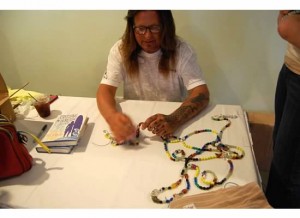 During the event, 3 people sat down at our table.  A man named Andy, a younger guy named Josh, and girl named Kalyn.   Come to find out…..the man owned the jet ski rental company that runs out of the hotel.  And Josh worked for him.  The girl was Josh’s girlfriend and is in school to be an Occupational Therapist.  We ended up chatting with them about their roles in the days events.  They asked about Cannon’s day and if he loved surfing.  We told them all about it.  In telling that story, we had to mention that he had had surgery.  Which led to more questions and bascially the entire story of his journey.  They were so kind and interested in what we were telling them.  During the time that I was telling the story, my husband, sister, and parents were returning to the table after purchasing many raffle tickets.  Our table guests commented on how many we had bought and I told them how badly I wanted to win a surfboard for Cannon’s surfing themed bedroom.  Of course, I then had to then show them pics.  🙂

Then, came time for the raffle.  There were so many great prizes.  Not just several boards but bikes, gift certificates, and much more.  I so hoped we would win something.  We had bought so many tickets.  But, we did not have much luck that night.  None…..actually.  We came up empty handed.  Oh well!

After the raffle, the event was essentially over and we began to get our things together to leave.  Cannon had woken up and gotten really upset right before the raffle drawing began so my dad had already taken him back to our room.  Josh came running over and told us to wait here.  Not to leave just yet.  That he would be right back.  When he returned, he was carrying a surfboard!  He told us that this was an old board of his.  It was used, had a hairline (not really visible) crack in it, and needed to be cleaned up but if we were going to just use it to display…..it would work great!  We could not believe it!  What an amazing gift!  We kept asking him if he was sure.  That he didn’t have to.  But he said he was.  We grabbed a pen and had all 3 of these awesome people sign it.  Along with Izzy and Duane (Cannon’s surfer from last year).  We took a few pics and then said goodbye!  We couldn’t wait for the sun to come up so that we could show it to Cannon.  (And when it did…..HE LOVED IT!) 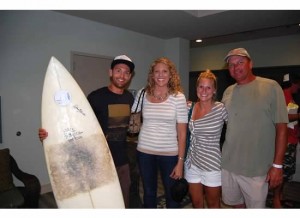 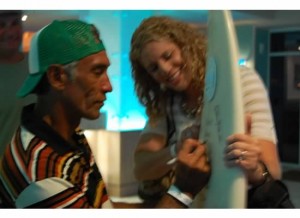 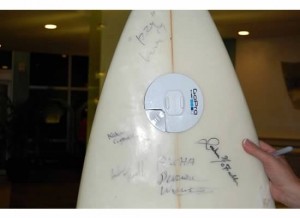 The next challenge was how to get it back out west with us.  It’s big and costs a lot to bring on a plane or to ship.  We kept hearing a $200 figure.  My parents had been thinking about making a trip by car so it sat in their SC garage…..waiting for when that might happen.  At Christmas time last year, we were back home for a visit.  And my good friend, Melissa, and I were talking about the board.  She mentioned that she had some military friends moving out our way and that she would ask them if they had any room to bring it with them.  By the end of our visit, she had a commitment from them to do just that!  AMAZING!  And several months later, we met up at a location about an hour from our home and grabbed Cannon’s board from these incredibly kind-hearted people…….Carlos and Jennifer.  And they didn’t just throw it in a moving van.  They drove cross country with it in a 2 door sports car!  Are they incredible or what?!  I still can’t believe it! 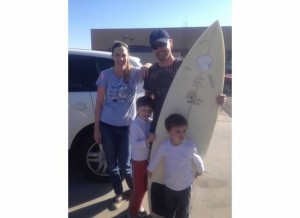 Surfers Healing is such a fantastic event!  And we are also so grateful to the Tides Hotel’s Blu Restaurant for hosting the dinner!  Thank you to Josh, Carlos, and Jennifer for making this happen for my baby!  We will NEVER EVER forget your incredible kindness!

I have some cool plans for this board!  Can’t wait to share very soon!