When Cannon was around 10 ½ months old, Santa brought him lots of presents at Christmas time.  One of these gifts was some Leapfrog letter magnets. 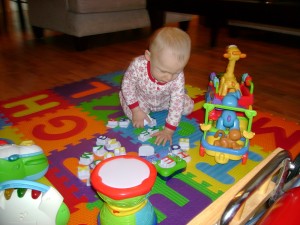 Cannon really latched onto these and played with them A LOT!  Often when I was in the kitchen cooking a meal,  he was in there with me, putting the letter magnets in the little console that identified what each letter was, what sound it made, and sang a little song.  He did this over and over for months.  When he was 18 months old, we were hearing him verbalize what the letters were before the console told him.  Mark sat down with him and picked up each letter, all out of order, and asked him what each one was.  He got every single letter right!  WE COULD NOT BELIEVE IT!  He was 18 months old!  We had him show everyone who came over!  We were so proud!  I later went out and got him an additional set of the magnets.  A lowercase letter set.  He memorized them in a couple of weeks!  Around this time, I also realized he knew all the letter sounds and could count super well.  CRAZY! I made him a chart with the numbers from 1-20. So he could see what the numbers looked like.   He already knew them.  So, I made him another with the numbers from 21-40.  He memorized them quickly and could point to them out of order and configure them with foam numbers if asked.  Then I would hear him counting and he would go all the way to 49.  (I hadn’t taught him that high!)  He would then look up at me and if I said 50……he would count from 51-59 before pausing again to wait for me.  HE UNDERSTOOD THE PATTERN! It was incredible!   Anyways, back to reading…..  The lowercase magnet set I purchased came with a console that allowed you to put in three letters to make simple words. 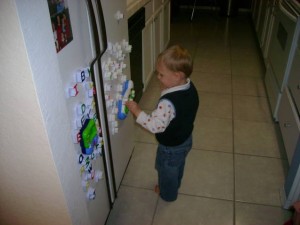 So next (at about 22 months), he began making simple words on his own.  He would carry the magnets all over the house and leave words.  I would find them on the arm of the couch, on the entertainment center, kitchen counter, on the high chair tray, etc…. 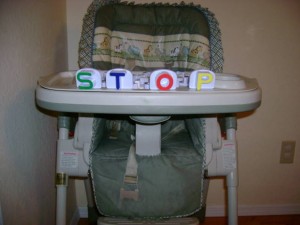 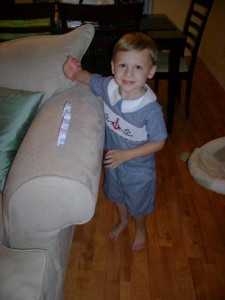 My favorite story from this time was from right after Townsend was born.  I was sitting on the couch nursing Townsend and got up to do something.  When I came back to the same spot to sit back down…….Cannon had left one of his words where I had been sitting.  It was “F-A-T.”  Nice, right?!  I used to take pictures of his words in various places around the house.  I even made a scrapbook page of these photos.  Watching shows like “Between the Lions” and “Super Why” on PBS have only increased his ability to read and comprehend stories.   “Between the Lions” is for beginning reading what Sesame Street is for letter and number recognition.  And “Super Why” deals with beginning reading, reading comprehension, choosing the right word from a list of choices for a sentence, and solving problems.  Since he began reading a few weeks shy of turning 2, he has improved greatly now that he is 4 years and 4 months old.  At the end of this post you will get to see the amazing reader he has turned into!

You may remember me telling you in “Our Story” and some earlier posts about Hyperlexia.  This is one of Cannon’s many diagnosis’.  And it describes him to the “T.”  Hyperlexia  is as an intense fascination with letters and numbers that far exceeds what is expected of a child at their chronological age.   It can also cause difficulty in understanding verbal language and in socializing and interacting with others.  Hyperlexics may also exhibit the following behavior characteristics……….

– Learn expressive language in a peculiar way, memorize the sentence structure without understanding the real meaning (echolalia) and reverse pronouns.

– A need to keep routines, which at times proves to be difficult to break them

– Auditory, olfactory and / or tactile sensitivity

– Normal development until 18-24 months, then regression

It is definitely because of the Hyperlexia that Cannon is the reader he is today.  Which is totally a blessing and a curse, my friends.

Here is a video of Cannon reading a book that a precious friend wrote.  It is very special to me both because of this friend and because of the subject matter!  The book is called “I Am” and is written by Chrysti Carol Propes.  Have a listen!

God has blessed our sweet Cannon with an amazing ability to read!  We pray he will always enjoy it like he does now!  And also wonder……at this rate, will he be digging into “War and Peace” in Kindergarten?!  Our hope is that his choice will be his Bible.  So, that he will never feel alone and will always have hope for his future!  Much love!

7 thoughts on “Our Amazing Reader”