We were released from the hospital this evening and made it home ok.  Cannon had a pretty good night last night.  Except for the 2 o’clock hour.  He was up for most of that crying.  Even after pain meds.  We were just about to resort to morphine when he finally calmed down.  After that, he continued to sleep well. 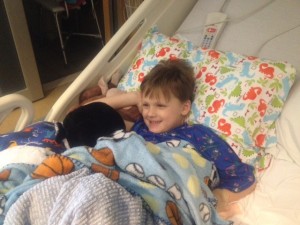 The morning was filled with consults and rounds.  Consults with all the residents from both surgery and the team following him on the hospital floor.  Then, rounds with both.  It was decided that he could go home after lunch, if he was eating well.  If we, once again, flushed the tube successfully ourselves, and after he had a shower.  The latter was because we had really protected him from seeing the button to this point and we knew it would probably be somewhat traumatic when he finally did.

Lunch went well. He ate his favorite, salmon pasta, from home.  A baked potato and some grapes.  He was a hungry boy.  Then, Mark, myself, and his nurse took Cannon in the bathroom to flush the tube.  Mark did the honors this time while the nurse and I tried to hold him.  It was super tough and we struggled to manage.  Our anxiety level about doing this at home with just the 2 of us is high.  But we have written Cannon a new social story to help with that and we will just have to pray hard on that one.  Then, came the shower.  He usually loves this part.  To get clean after days of sweating and laying in bed.  But this time was very different.  He was so wobbly that I had a really hard time trying to hold him up while washing him.  He just cried.  Hard.  He could see himself in a mirror nearby and I know he could see this new thing protruding from his body.  It really scared him and he cried sad, crocodile tears.  Poor buddy!  He ended up having such an intense meltdown that I had to enlist help and also more meds.  I hate this for him!  It just breaks your heart!  Even though we know it is what’s best.

After his shower, we put his new band on him for the first time.  A local prosthetics/orthotics company made Cannon 2 special bands to help protect his new button.  They are wide abdominal binders that velcro together in the back.  And have a donut cut out of pool safe material velcro-ed inside.  He doesn’t like it but this is the best protection we can get for him.  And he will hopefully get used to them.

After taking a last ride in the wagon around the unit to say our goodbyes…….and dropping off a card and flowers at the nurses station for our hospital family…….we were headed out.  For the last time??  Maybe…..only time will tell.  One of the Child Life Specialists and I decided that if we made it a few months with no visits……..that we would come back for a visit and get one last bead for our Beads of Courage.  It is the “End of Treatment” bead.  What a day that could be!  That is totally our goal now! 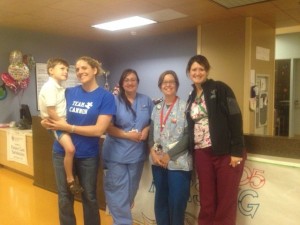 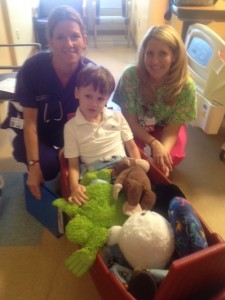 The ride home was tough.  Cannon felt every bump in the road and really struggled with the fact that he had to sit straight up.  That is really painful for him right now.  Laying flat or even standing for short periods of time are better.  He cried.  Once we were home, I had to carry him in laying horizontal across my arms.  And he laid still on the coach until bedtime.  Where he is now sleeping comfortably…….and I am going to go join him in a sec!

So, home sweet home we are once again.  To stay….we hope.  To figure how to navigate all of the new challenges that come with being home alone with this device.  To do what a fabulous friend of mine always preaches…..to “Have faith, expect miracles.”

Goodnight wonderful blog family!  Thank from the bottom of my heart for praying my boy home!  We love all of you!

2 thoughts on “On To The Next Chapter……”