Today was our scheduled day to admit Cannon to the hospital for a 2-3 day EEG observation.   We arrived at 10 a.m. and checked him in.  After getting to our assigned room, we spent a while going over his history and getting his med schedule straightened out.  One of our therapists, thankfully, came and helped me bring all of our bags up to the room.  We always look like we are moving in but I just have to be well prepared.  Even the hospital cannot accommodate Cannon’s crazy diet so we have to bring all of his food and drinks.  We were sent down fairly quickly to the area where they would hook up all 27 leads for the EEG procedure.  He had been prescribed a medication to take at home before leaving for the hospital and another to take right before the procedure.  We did this and when it came time to begin, the techs were just not satisfied that he was relaxed enough.  He was quite hyper.  So, they decided to send us back to our room and talk with his neurologist.  I was informed that they were going to recommend I.V. sedation.  I questioned this because I thought that would mess with the test.  They confirmed that fact and said it would mean that we would lose the first 24 hours.  We came back to our room and I was bummed.  I did not want him to go through this any longer than he had to.

During this “in between” time, we had a special visitor.  “Lady,” the therapy dog, came by to say hello and play.  Cannon enjoyed petting her and rubbing his arm on her soft fur.  She even got up on his bed for more fun and interaction.  I love this hospital for all it does to make the kids comfortable! 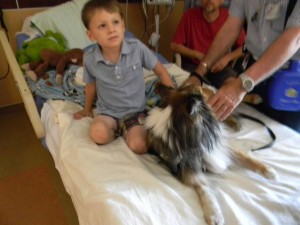 Thankfully, because our hospital is so wonderful, they came up with a better plan.  They decided to try a combo of 2 other drugs that were unpredictable but should get the job done.  And the good news was that they wouldn’t affect the test.  So, we did and they worked.  He fell asleep!  The men came up to our room and did the hook up.  Cannon stayed asleep throughout but did stir often and protest somewhat about these leads being glued to his little head.  First, they put a clear substance in the desired spot.  Then, they place the lead.  Followed by a big glob of green goo over the whole area and a small strip of wet, white tape.  The final step is to squirt a white, conductive jelly into the small hole of the lead.  They, then, bind all the wires coming off the leads with tape, hook them up to a machine, and put the machine in a small backpack.  When they finished, they placed a net cap over his head.  We were given a button to push when and/or if we see anything that troubles us.  Anything that looks suspicious.  We press the button and it marks the report.  We can use the intercom on the wall to tell the techs in the control room what we saw.   Did I mention there are cameras in the room?  They are watching his every move and will follow him if he moves around the room.    He continued to sleep for 2 more hours!   When he woke up, he was incredibly groggy.  He didn’t speak except when spoken to and when you spoke to him he responded with short answers that were quite slurred.  I fed him some dinner, he watched a Sesame Street video, and he fell back asleep.  So, that was Day 1.  Not too much to report but a report nonetheless.  Thank you all for your continued, thoughtful prayers for our family!  You guys are the best! 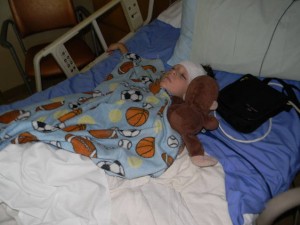 P.S.  – We also got an x-ray today to see what is going on in his tummy.  It showed a ton of gas and air but no impaction!  Yay!