Cannon made it home from the hospital in time for Easter!  What a blessing!  And he seemed to be doing well so we were able to go to church!!!!  In their precious Easter outfits personally smocked by their Grand Mommy. 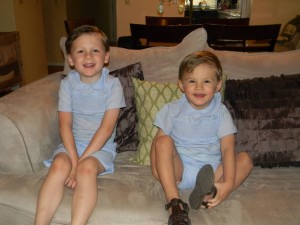 Our church didn’t have a nursery that day so both boys got to go to church with us.  (Got to or had to…..hmmm.)  I packed plenty of snacks and toys to hopefully keep them entertained for the service and we set off.  We got there a few minutes late and couldn’t find a seat downstairs.  So, we went to the balcony.  We chose seats right along the front row of the balcony next to some friends and their 2 girls.  The girls were enjoying themselves taking it all in and dancing to the music.  Townsend joined right in.  Cannon tensed right up and said several times …”I want to get out of here.”  (A script he uses when he is uncomfortable.)  Whether it was the music, the large volume of people, unfamiliar surroundings, or our constant nagging to “shhhhhh”……..I don’t know.  I realized immediately that I was going to have to go straight for the snacks.  So, I gave him a snack cup full of yumminess.    He wolfed it down far too quickly.  I was trying to slow him down but anytime I did so, he loudly voiced his displeasure.  Of course, Townsend decided he wanted snack too so I gave him his snack cup.  He was more interested in the music and left it unattended a few times.  He was busy clapping and telling us “This is fun stuff!”    So, it was raided and eventually taken over by his brother.  I tried then to distract Cannon with the toys I had brought.   However Elmo, some Matchbox cars, a small Magna Doodle, and a few books were of no interest to him at that moment.  He squirmed and fought me to get down.  He ran over to the balcony’s half wall……and grabbed the top with his hands and hung there.  My anxiety took over.  I couldn’t take it.  I know him and I know that if given a moment…..he could try to find a way over that wall.  Mark grabbed him and I tried to get him to sit back down.  I even gave him a little more snack.   But it was short lived.  By time for the sermon, we were out the sanctuary door to join many other parents and kiddos in the Fellowship Hall.  Townsend lasted a little longer but he and Mark joined us a little later. 😉  Just another day at the office as a parent!

When church was over, we headed home for some more fun.  I spent the rest of the day in the kitchen.  My haven!  First, I made a gluten free vanilla cake that I later cut into the shape of a cross, covered in fondant, and decorated with purple flowers.  Then I made a Regency Beef Tenderloin with Horseradish Butter, Balsalmic Roasted New Potatoes, Green Bean Salad with Feta Cheese, and my Mom’s Pineapple Casserole.  I totally use cooking as an escape.  Give the kids a video, crank up my ipod, and go to it!  It’s the best therapy! 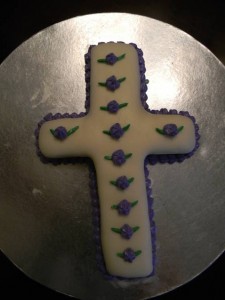 Later, we gave the boy’s their Easter baskets.  They like Charlie Brown so there is no such thing as the Easter Bunny in our house……it’s the Easter Beagle.  😉  Since, Cannon can’t have candy our baskets look a bit different than most.   They each got a stuffed animal from Hallmark that has something to say or a song to sing, a Sesame Street video, a toy, and 3 books.  They had a good time playing with each thing!  After that, we went outside for an Easter Egg hunt.  The boys waited on our screened porch for me while I hid the eggs.  Then they came out and went to work looking for them.  They had a blast and really worked together!   They left their baskets in the middle of the backyard and brought each egg over to “shoot” inside when they found them.  Townsend gave almost every egg to Cannon.  He loves pleasing his brother.  It is so sweet!  Our Easter was very nice and I hope each of you had a blessed day, as well!

One poem kept coming to my mind when I was reflecting on this amazing day in the life of our Lord and the world.  It isn’t necessarily an Easter poem but I hope you will enjoy it.  Here goes…….

He was born in an obscure village, the child of a peasant woman.  He worked in a carpentry shop until he was thirty, and then for three years he was an itinerant preacher.

When the tide of popular opinion turned against him, his friends ran away.  He was turned over to his enemies.  He was tried and convicted.  He was nailed upon a cross between two thieves.  When he was dead, he was laid in a borrowed grave.

He never wrote a book.  He never held an office.  He never owned a home.  He never went to college.  He never traveled more than 200 miles from the place where he was born.  He never did one of the things that usually accompanies greatness.