Cannon had a restful night.  He went to bed early and slept until 6 a.m. without so much as a peep all night.  A pretty impressive feat in a hospital.  I even felt comfortable enough that he wouldn’t pull his I.V. out that I didn’t sleep in the bed with him for the 1st time ever…….I pulled the chair-that-pulls-to-a- bed thingy over next to his bed and snoozed.  It was nice!  He woke up talking away and seemed very connected and “with it.”  I was so excited!  This is what usually happens a couple of days after a cleanout.  He is phenomenal for a few days but then begins to show signs again that he isn’t feeling well.  That is the pattern that we cannot seem to kick.  But, I am grateful for the good days.  So grateful!

The nurse came in and we decided it was okay to pull his I.V.  He was doing good and discharge was just a formality.  We ordered breakfast and got him a shower.  After that, I poured him some Almond Milk.  He wouldn’t drink it.  Hydration is crazy important for him……so that we can “keep things moving” and to allow all his meds to work properly.  His seizure meds actually lower his sodium level and so if he were to get dehydrated it puts him in danger a lot faster than the average kiddo.  This has forced me to become very strict with him on hydration.  His docs want him to drink at least 48 ounces of liquid a day.  So, our rule is that he has to drink his milk before he can have breakfast.  Cannon would eat all day long and not drink a drop if he had him way but he loves Almond Milk.  So, I gave him that kind for that specific reason.  But, he wouldn’t budge for 2 hours.  I was getting quite frustrated to say the least.   Finally, I decided to give him some juice with his Miralax and see if we could start there.  He drank it …..thank goodness.  Then, I handed him back his milk and for some reason, he drank that, too.  Silly guy!  After breakfast, we were off to the playroom where we spent most of the rest of the morning until we were released.  The rounding docs felt good about where we were and gave us a prescription for more Valium to give him only as needed.  I never planned on filling it.  We have an appointment Monday for our Pediatrician to check him out and will consult with the surgeon this week, as well, to line up his next surgery.

Mark and Townsend arrived and I took my sweet little buddy downstairs for some fun.  I try to do this each day when they come.  Take Townsend somewhere alone so that he knows he is important, too.  Sometimes we go to the cafeteria for a treat, to see the awesome fish tanks, to play with the interactive wall, outside to a play area, or his favorite, to see this train that runs around the top of the toy store/gift shop.  It is really hard to see how his behavior towards me has changed over the last few months.  I have been with Cannon at the hospital for 3 weeks out of the last 3 ½ months.   I think Townsend just doesn’t expect to see me anymore when he wakes up and that is super hard for me to take.  But, we are all doing the best we can with the situation.  So, I took him down to see the train and I bought him a special new stuffed giraffe.  A Zoobie to be exact.  He was happy. 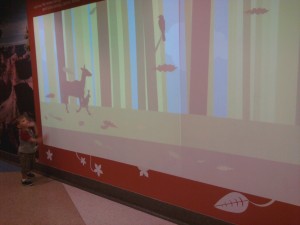 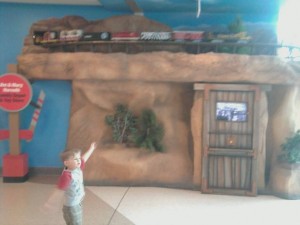 When we got back upstairs to the playroom, I noticed Cannon seemed different.  He was scripting a lot and not making any eye contact.  (Scripting is when he repeats things he has heard from a book, movie, or TV show over and over…..there is no original thought involved.  It is kind of like nervous energy in vocal form….if that makes sense.)  He had a few mini meltdowns over different things while we waited to get his discharge papers.  Mark and Townsend left ahead of us for home and when it came time to leave, one of the nurses helped me carry the last of our things down to our car.  The entire way down and to the car, Cannon was screaming “NO!”  and “Hospital!”  Over and over…..louder and louder.  By the time we got to the car, he was so worked up…..it took she and I 5 minutes and a lot of muscle power to get him strapped into his car seat.  She decided there was no way we could make the trek home like this and ran back inside to get him some Valium.  She returned, I administered it, and we were headed home.  He screamed for a long time and then fell hard asleep.  He woke up before we got home and got going again.  When we arrived home, he ate some lunch and continued to script like crazy.  All afternoon and evening was nothing but scripting.  It was so hard because he was so disconnected.  I couldn’t get him to look in my eyes even for a second.  That is not normal and frankly, all the meltdowns aren’t normal either.  They are only frequent when he is impacted and in terrible pain.  So, this just doesn’t make sense.  I spoke with our Feeding Therapist and told her that the only thing that made sense to me in regard to Cannon’s “leaving the hospital meltdown” was that maybe he understands that once he leaves the hospital he is going to start feeling bad again.  She agreed.  He is smart and I truly believe this is how he is feeling right now.  At bedtime, it took him over an hour to fall asleep because he just couldn’t stop scripting.  You find yourself begging and pleading with him to stop and just relax.  Knowing full well that he can’t figure out how and would if he could.  It breaks a mother’s heart.  Breaks it right in half.

I was really sad tonight and knew that I had to surround myself with God and nothing else to keep “living vertically.”  So, I popped in a DVD I purchased recently per my good friend, Jenny’s, recommendation.  It is called “Fruitcake and Ice Cream” with Louie Giglio.  The point of his message, to me, was to fully get across what grace really means and how it is truly God at work in our lives.  He harped on the life of Jesus and how he was without sin and came here to Earth to take our sins away.  And that all we have to do, no matter where we are today or where we’ve been, is ask for forgiveness and allow him to come into our heart and life……and He will!  Even though I have “crossed that bridge, personally” it was a great reminder on this Easter Eve of the loving lovesick Father we have in Heaven.   And how I want to live my life in a way that is pleasing to Him and that honors Him.  The DVD told a beautiful story of a completely anit-God college student who comes to know Christ through a Christian roommate.  He reads from her personal journal and shows the before, during, and after story.  Pretty powerful stuff friends!  Might need to get your hands on a copy!  In the end he reads the lyrics to a beautiful song that many of us know but I feel compelled to cut and paste.  It is called “Mighty To Save.”  I pray that you will allow the lyrics to touch your heart and minister to it today…..no matter where your heart is spiritually!    I love you all!  Here they are…….

These words just really moved me tonight.  I hope they do for you as well!