Our 3rd day here began the same way our 2nd did……..with Cannon receiving the “Go Lytely” medication through his “NG” tube.  During the night, he completed one gallon of the medicine and the doctors decided to begin another gallon because his “results” were not quite clear yet……which is the goal of the cleanout procedure.  To flush him out completely.  Around 9 a.m. they took an x-ray to see where we were and found that the impacted area had moved slightly but not much.  So, we continued instead of stopping the 2nd gallon.  The surgeon came in as well and threw us another curve ball.  He wants to try one more thing before putting in the ”Chait button” I mentioned yesterday.  Cannon has had biopsies during his previous endoscopies but never a deeper biopsy for something called Hirschsprung’s Disease.  (I think I spelled that right.)  This is a condition that usually presents itself as an infant but can still occur in kids Cannon’s age…..just rarely.   I mentioned it as a possibility to our last G.I. doctor over a year ago when both our pediatrician and feeding therapists asked me to run it by him.  He quickly discounted it because he said it was only in infants.  My understanding of the disease is that kids who have this have a section at the base of their G.I. tract where “ganglion nerves” did not form.  So, they struggle to use the bathroom because they can’t feel it properly.  Once the surgeon biopsies the area, it will take a couple of days for the pathologists to come up with the results.  If it is Hirschsprung’s Disease, they can fix it!  They would surgically remove the dead area of nerves, pull down what is above it, and sew it in.  And he would be good as new!!!!!!!!!!  But it is a fairly big surgery.  If it isn’t Hirschsprung’s, then we will most likely have to go ahead with the “Chait button.”  So, we are totally praying that it is this crazy disease!  What a much less stressful solution for the long run!  But the chances are very low the doctors said.  I told them that I will take hope, no matter the dose!  The biopsy will occur sometime in the early morning tomorrow.  The rest of our day today was spent just changing diaper after diaper.  And as you can imagine, he now has a bad rash but we are treating it with creams and sprays to make the changes more bearable.  When the 2nd gallon dripped its last drop into his veins, he was asleep for the evening.   So, it was decided to discontinue the “Go Lytely,” let him rest, and we will x-ray tomorrow before or after the biopsy.  We are all interested to see if his colon is finally clear.

This hospital never ceases to amaze me with how above and beyond they go to make the kids that are forced to be here comfortable and happy.  Guess who visited Cannon today in his hospital room, besides his Preschool Aide, ABA Therapist, Physical Therapist, Preschool Teacher, and one of my sweet friends???  A miniature horse named Snickers!!!  I couldn’t believe it!  The horse was even decked out with tennis shoes and bunny ears!  Cannon had been totally mellow, not saying much or showing any emotion all morning. But, when a horse walked into his room…..he sat right up!  He petted him, talked to him a little, helped fix his bunny ears, and decorated him with stickers.  Townsend got to join in the fun, too!  What a great experience these people are providing for the kids!  We actually rode this same horse around the parking lot the last time we were here.   We did not expect a personal visit but were thrilled to have it! 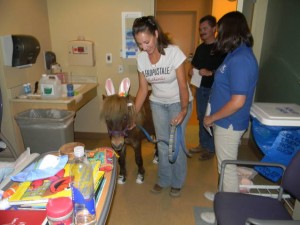 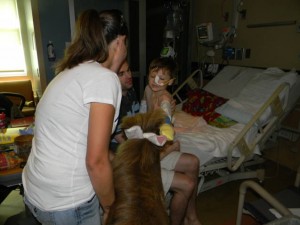 Also, the Ronald McDonald House was celebrating an anniversary here today and Ronald himself stopped by Cannon’s room.  We couldn’t go down to the party because of Cannon’s treatment so Ronald came to see him.  He talked to Cannon a bit and then played him Twinkle, Twinkle Little Star” on his yukelele.  He asked if we had any requests so I mentioned Cannon’s current favorite song……..”On Top of Spaghetti.”  He rattled it right off!  Cannon was so impressed and smiled!  It was so great to see him happy even though it was such a tough day. 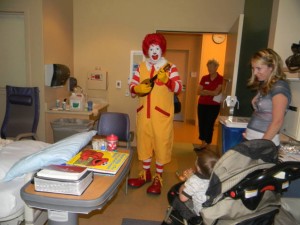 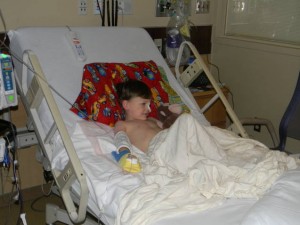 We are so grateful for people who volunteer their time to bring a few moments of joy to our little guy!  And to all of you who are praying for our family!  We are beyond blessed!

6 thoughts on “Day 3 in the Hospital”