8 weeks ago, I was beginning to wonder if Cannon’s days of frequent hospitalizations for belly issues were over.  Clear for most of the previous 5 months…..things were going pretty well.  Not perfect, not without distress or problems, but far better than the early part of last year which had seen 5 admissions.  But now that false sense of security has been crushed and we have entered into our 3rd hospitalization in the last 8 weeks.  Yep, back in the hospital…..just as impacted as ever.  And like our last visit…..with a new issue to boot.  Elevated air fluid levels.  There is no real rhyme or reason to why this is happening…..but it is causing us a lot of concern and we are feeling the pressure to re-evaluate things. But let me not get ahead of myself.  Here’s the story of the last 2 days…..

I brought Cannon into the E.R. of our Children’s Hospital yesterday (Monday) morning after a little over a week of concerning behavior.  He just could not stop crashing his tummy into things, scripting nervously, getting extremely emotion, and finally…..actually screaming over and over “Help me!  Take me to the hospital!”  A victory in itself even though the content of the statement is heartbreaking.  He had myself and one of his ABA therapists in tears when he did this.  Proud and sad tears….a weird combo.  I packed us up quickly and brought him in.  We are so well known down there now and proven credible in our predictability of impaction….that the doctor called up to get a room reserved before they even did the x-ray.  And when the x-ray did come back….it didn’t take long before we were heading upstairs.  The process was expedited due to the earlier phone call and because he had begun a massive meltdown over the reality of being back in the hospital.  Even taking him to the E.R. playroom didn’t calm him.

When we got up to our room, we immediately heard there was an opening in the anesthesia schedule and they would be coming to get him very soon to start the process of getting the tubes in.  Another wonderful development, as it often takes many many hours to get this to happen.  And they were right, probably 30-40 minutes into admission, we were being wheeled into the PACU (Pediatric Acute Care Unit).  He immediately became very upset and they had to go a different route with anesthesia because of it.  The doc gave him a quick shot in his arm which should have knocked him right out…..but it didn’t.  He requires more than the average kid his age and weight.  No surprises there.  So, they had to put the gas mask on him to finish getting him to go down.  When that finally happened, they began the search for a vein for the IV.  And came up short in both hands.  Previously, there had been good veins there, but they were all used up.  I watched his arms turn purple as both had tourniquets on for a while during the search.  They abandoned the hands and a surgeon found one in his foot.  Not an ideal spot but we had to have a vein.  The surgeon then informed me that we were going to have to start thinking about a port in his chest for IV access as we are losing veins.  A freaky but very real possibility in the near future if things don’t change fast.  After that was placed and taped up, the NG tube went in with seemingly no issues.  Recovery went as well as possible.  I had brought my laptop down to work on an update to ya’ll while he slept it off.  But when he started coming to, he uttered the name of his favorite show.  Inspiration struck me and I typed the phrase “www.netflix.com” into my browser.  I quickly got this show streaming via Netflix and watched as he came out of anesthesia better than ever.  Even though he had been given a combo of anesthetics that I was warned, he would come out of badly.  I now have a new trick in my arsenal!  But this kid never allows himself to be predictable!

Late in the evening, an attempt was made to begin the infusion of Go Lytely solution and start the process of clearing the impaction.  Immediately, the pump’s machine went berserk.  And wouldn’t stop.  So they tried to flush the tube and nothing was going in.  A team of 4 came in a few hours later and an effort was made to untape the NG tube from his face and put the tube in further.  Their theory being that maybe it wasn’t in far enough.  When this didn’t work and we were all sweaty from fighting to hold him down, it was decided to suspend the attempts to salvage and wait for morning.

At rounds, the medical team assigned to his case decided that we were going to give him some extra Valium and then take him into the Procedure Room on the floor and try again to save the NG.  They had discovered via an x-ray that it was “kinked” and thought that they could pull it mostly out and then re-insert…..possibly releasing the “kink”.  But before they could even finish rounds….the IV’s machine began claiming over and over that it was occluded.  A couple nurses came in, untaped it, and tried repeatedly and valiantly to save it.  They noticed that the IV needle was also “kinked.” Which we were now realizing was the word of the day.  And the IV blew.  As did our hopes for salvaging the NG.  We now had no way to relax him with Valium.  He would have to go back down to anesthesia for a new NG and IV.  And talk of the port possibility intensified.  That was a really tough pill to swallow for Mark and I.  The process is so tough on him and we just wanted for the infusion to already be going so we can get out of here sooner.  But we had to deal and now, so did Cannon.  We decided to make the best of our time waiting on Anesthesia and get out of the room.  Cannon loves to just walk the halls…..telling me which direction to turn at each juncture.  So, we did that with him snuggled on my shoulder until my back could no longer take it.  Then, we resorted to sitting on the couch in the playroom and reading an entire “Treasury of Curious George” books with our favorite stuffed animal (ironically Curious George himself) close by.  And finally, he snuggled with his Daddy and listened to a harpist pluck beautiful music for all the hall to hear.  “Twinkle Twinkle Little Star,” “What A Wonderful World,” and “Bridge Over Troubled Waters” to name a few.  Cannon relaxed so much he fell asleep.  Townsend enjoyed it so much, he begged for and received a quick lesson from the accommodating harpist. 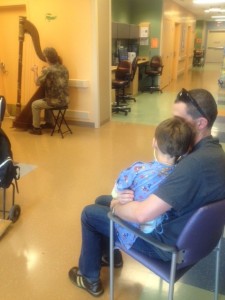 Around 2;30 Tuesday afternoon, we were rolling back down to Anesthesia.  And thankfully one of favorite Attending Docs who really has a heart for Cannon, met us there and put the tubes in himself.  Not necessarily standard procedure!  Like I always say, we are so blessed to have such a loving and caring team here that truly cares about our son!  The NG went in perfectly and flushed beautifully.  And as I type, it is pumping Go Lytely solution through his little body.  I have heard the insane belly gurgles to prove it!  AND the victory of the day was that an IV was obtained in his hand!  Halting the conversation about a port for now!  Phew!

While we were downstairs, our G.I. doctor came by the room and talked to Mark.  Or dropped a bomb, I should say.  He said that we have to re-evaluate the possibility of putting in a Chait Button. Something we took a long, hard look at doing a year ago.  And ruled out due to his insane sensory issues.   This button, similar to that of a Mic Key feeding tube for babies, would be placed externally in his side.  There is a spiral tube underneath that would directly access him colon.  Every day, we would take him in the bathroom, open the button, and insert medicine.  This would flush him out completely and could potentially solve all our problems.  But the risks are astronomical!  And the 3 pediatric surgeons in our city all said last year that they wouldn’t do it.  That the risks outweighed the gains.  I will elaborate more later but for now…..I have inundated you with enough info.

The last thing tonight comes straight from my husband’s precious heart.  Today was tough emotionally.  We hate that our baby had to endure another procedure and now is facing a very scary potential surgery.  We are emotional and uncertain, intensely prayerful yet slightly broken over the situation.  Mark told me when he returned from running an errand that he had heard this song on the radio.  And it was exactly what he needed to hear today.  Don’t you love how God does that?  I pray you can absorb the reality of these precious lyrics and then let this song speak directly to your heart.