Well, Christmas is over and the New Year has begun!  But I have been so snowed under with a project I will tell you about soon that I did not get a chance to tell you how Christmas wrapped up for us!  And I had a few interesting things to share.  So here goes….. 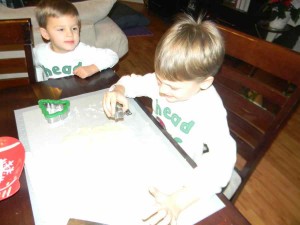 I last spoke with you on Christmas Eve and told you our plans.  Well, all went according to those and we baked cookies, attended church, and each opened a gift.  Church was quite an event due to the fact that both boys had to join us!  There was no nursery.  My little men looked so handsome in their cute matching sweater vests, khakis, white oxford button downs, and tan leather boat shoes.  Hair moussed to perfection.  But, man, oh man, were they a lot of work in that environment!  Cannon actually made it all the way to the sermon.  Which was a Christmas miracle in itself!  Thank God he loves letters and the video screens provided an endless opportunity for indulgence in that love.  And he also loves the hymn book, you might remember.  He flips through and reads all the titles.  He cracks people up when this sweet little boy voice is exuberantly reading, “A Mighty Fortress Is Our God, Come Thou Fount Of Every Blessing, and O Sacred Head, Now Wounded.”  So, those 2 things worked for a while.  Then, we moved to snack mode.  Well, unfortunately, I made a poor choice in snack selection.  Veggie Stix….a baked snack that packs quite a crunch.  About the loudest snack a child who eats like a cow could eat in a quiet room.  Ugh!  Way to go Mommy!  I just sat there praying that he would eat quickly.  Because there was no taking it away without meltdown once I realized my idiocy.  After that, I had no ammo.  He wasn’t interested in any of the small toys I had brought along.  I had nothing to throw at the “be quiet and sit still because it is the right thing to do” cause.  So, we had to resort to pacing in the Fellowship Hall until all was over.  We snuck back in for the final song.  Long enough for Cannon to see all the candles lit and hear everyone singing his favorite Christmas song…..”Silent Night.”  Townsend did pretty good considering he is 2.  He was mobile and into things but he made it through the whole service with his Daddy.

When we got home, we set things up for Santa.  Cookies…..check.  Milk….check.  Carrots for the reindeer…..check.  All on special Santa plate…..check. The boys were very excited!  They each opened a present.  Townsend opened a robot called Sparx from the Toy Story 3 movie.  And Cannon received the Hungry Hungry Hippos Game.  Christmas pajamas were thrown on, a few pics were attempted, and 2 tired boys hit the sack. 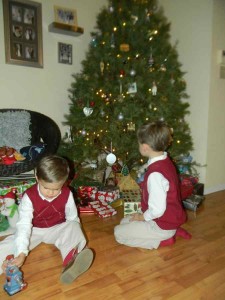 The next morning was sooooo much fun!  They awoke to find a barren plate with nothing but a bunch of crumbs and a note from Santa.  It said, “Thanks for the cookies!  Love, Santa.”  Cannon carried it around reading it over and over.  With Mark’s work schedule, we decided to wait until after breakfast to show them their Santa presents.  I told the boys that I hid them until we were all ready.  So, we had a delicious breakfast of sugared bacon, creamy scrambled eggs with green onion, and fresh fruit.  Cannon had a version of this that is appropriate for his diet.

After breakfast, Mark took the boys to the playroom and I began to pull out all of their gifts from Santa.  A Cars bike for Cannon.  A large wooden parking garage with cars for Townsend.  For both, lots of games and almost every Toy Story character there is.  Each gift had a specific purpose and ulterior motive.  We are careful to pick gifts for our boys that will be fun but also serve a therapeutic purpose.  Turn taking games have long been recognized as an important tool for kiddos on the Spectrum.  Temple Grandin, a popular Autism Activist, says they helped her immeasurably.  Each day, we have been having game time, playing various games for as long as we can maintain engagement.  So, 6 news ones were selected individually with that in mind.  Don’t Spill the Beans, Guess Who, and Scatterpillar Scramble to name a few.  Don’t Spill the Beans is a game of precision for this age while Guess Who is great for forcing Cannon to notice people’s features and Scatterpilar Scramble is a good one for his fine motor skills as it uses tongs to place a marble on a moving target.   The acquisition of just about every Toy Story toy on the market also had a plan behind it.  The boys really enjoy the 3 movies and I love that the main theme throughout is how the little boy, Andy, plays imaginatively with his toys.  So, my idea was that if we had replicas of each toy, we could act out scenes from the various movies.  And hopefully eventually begin to add lib some of our own ideas and eventually move on to coming up with scenarios on our own.  We will see in time if this works but it feels like a good plan.  Now, for the bike.  It has taken the better part of the last 2 years for Cannon to learn to ride a tricycle.  We tried and tried to get him to just put his feet on the pedals and keep them there.  Long enough for him to realize that with minimal effort, he could push off and pedal till his little heart was content.  But for the longest time, no interest whatsoever and especially no excitement and therefore effort.  If he did anything, he would walk the tricycle around.  But recently, he began to just keep his feet in the right place and allow himself to be pushed around. But slowly….the effort came until he finally began to do it all himself and ride like a pro.  We were so excited!  And our therapy agency suggested we ride the wave and get him a bike.  So, Santa must have been listening and took care of that for us. 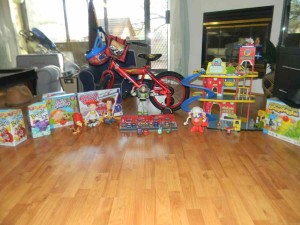 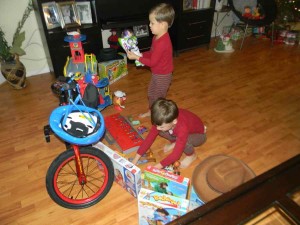 When the moment came that they saw their gifts….I was just as excited if not more!  The looks on their faces were priceless and so much fun to be a witness to.  Not much makes me happier than seeing one second of joy from my children!  Cannon went straight for Woody while Townsend made a b-line for Buzz Lightyear.  They excitedly shared each one while checking out the features and looking around in awe.  It was so precious!  Eventually, we moved on to let them open their presents under the tree.  The first present Cannon opened was a Charlie Brown Christmas Recordable Book from one of his therapists.  He loved it so much that we couldn’t get him to detach and open another for 20 minutes!  They opened lots of exciting gifts like more Toy Story toys, videos, books, outfits, and gift cards!  Quite a haul I should say!

They ended the day with giving Mommy the best gift!  They both took a nap at the same time!  I cannot tell you the last time that happened because it has been at least over 3 years ago!  It was incredible because I got to do what I love which is cook till my hearts content all while listening to my music!  I cooked up a really fun dinner of roast duck with a raspberry sauce, candied sweet potatoes, grits dressing, and cranberry muffins among other things.   After enjoying dinner, reading the Christmas story, and watching “A Charlie Brown Christmas” for the last time……our boys were toast and went to bed!  It was a GREAT day!  One that was thankfully mellow and meltdown free!  A wonderful day together as a family!  A fantastic celebration of our Savior’s birth!  I sure hope each of you can report similar days!

I leave you today with a awesome video!  One I did not think I would be showing you anytime soon!  I told you how it took Cannon 2 years to learn to ride a tricycle.  So, we obviously assumed it would take him a while to get the hang of his new bike.  Well, we were happily mistaken!  Less than a week later, our little miracle was cruising around the neighborhood!  One of his therapists took this video on his cell phone the first time it happened!  I love hearing how excited he is and seeing the look of pride on Cannon’s face!  A great moment to wrap up our Christmas!  Love and peace to each of you!

2 thoughts on “Christmas Wrap Up”